I'm a little overdue, but here are some photos from the Garden State Sheep festival that I took the kids to two weeks ago. 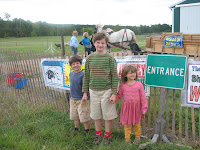 Just as we walked toward the gate, we were treated to an exhibition of sheep-herding skills. It didn't look intentional, because a few sheep seemed to sneak out of the festival grounds and head onto the gravel road leading to the parking lot and the highway where they could easily have been hit by a car. Shortly thereafter, two dogs came running hellbent 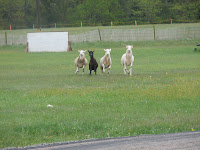 and rounded the sheep up in front of us. At one point, a sneaky straggler sheep tried to avoid the herding dog and ran toward us. We stood very still and we could have touched the sheep as it ran past, then the dog as it herded the sheep around us. 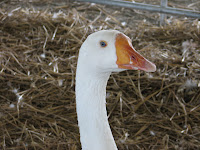 and the obligatory sheep shearing (it must be a testament to my regular attendance at sheep shows, because this used to fascinate me and now it seems almost jejune) 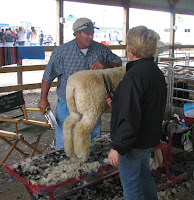 and we saw some gorgeous alpacas and llamas, including a white one 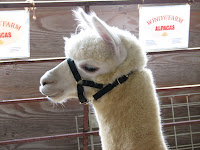 and a black one in the same pen (Ebony and Ivory?): 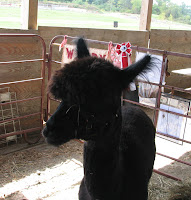 This is a very small festival, but it's charming and good for smaller children. My kids are getting a bit old for it, especially Elvis, but I'm thinking about getting a table there next year as a vendor and selling Black Bunny yarns.

In other news, it's been pretty quiet here. I'm knitting and dyeing and trying to pick up the slack given Tom's very busy work schedule right now. We are doing some edits to the book manuscript, and still on track for a June 2008 release date. (I've been told to hold off on giving you details about the book for now, but as soon as the publicist okays it, I'll give you the scoop.)

Barbara-Kay -- that reminds me -- this week there was a photo of a pygmy (is that the correct term?) horse who was a "working horse" with a blind (?) guy...on Cute Overload
http://mfrost.typepad.com/cute_overload/2007/09/this-way-dude.html

your kute kids are growing so fast! esp. elvis; he looks just like you.

can't wait for the book info!

Looks like it was lots of fun. Those sheep dogs are amazing.

And you really should set up a booth there. Wait, what am I saying- that's too far away for me to go to...

Now I'm all the more disappointed that I couldn't have joined you there.

I personally think that show would be a perfect "first booth" type of event, although I did find I bought a LOT more things from the folks that accepted credit cards.

C.--that Elvis is one cute boy.
He has such a look of profound thinking.
I am happy you cherish him so.