Just stop it. I mean it.


I mean, if the poor man interrupted his ceaseless ten-year search for the real killers of his ex-wife and her friend in order to repossess some stolen items (no doubt so that he could sell them and give the proceeds to the Goldman and Brown families to satisfy their multimillion-dollar civil judgment against him, which he thus far has not given a cent toward despite his tireless attempts to find gainful employment so that he can pay them), then ought we not let the Nevada justice system handle the controversy? Without having his face plastered all over the media?

Would it kill the media (pun intended) to just ignore the guy?

Geez, in just one day I got something like 15 messages on Ravelry! Cool.


There has been some knitting progress here. After seeing N. gleefully wearing an old pair of Opal Tiger socks I made for James 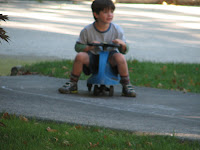 I cast on another pair for him in one of the Kaffe Fassett colors of Regia. This one is called Carribean (number 4261) and it's full of turquoise/cobalt blues, bright greens, with some rust and brown to provide contrast.

Over the weekend, I finished knitting the pieces of the little skirt for G., and I bought buttons so today I'm blocking it. I used a new yarn from Reynolds called Cottontail, and really liked it a lot. It's a blend of cotton and acrylic, but feels very cotton-y and knits easily. A little strand-y, like all cottons, no big deal though. And at five or six bucks a ball, it's nicely priced. I hope to have a photo of the finished skirt soon.

I also have been making slow but fairly steady progress on a cardigan for me. I'm using Frog Tree Pima Silk from my stash, and it's a beautifully soft, drapey yarn. I'm nearly halfway up the back. It's very plain, almost all stockinette, but that's okay. I'm in the mood for some low-key knitting after the summer full of excitement.

I'm planning a Black Bunny update on Friday. I've got this batch of wool/nylon (the one with the tighter twist): 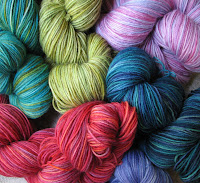 as well as some superwash merino, a few batches of Finn wool from Canada, and some more of the alpaca blend sock yarn (also from Canada). Three batches of roving, too. In the meantime, I'm working on some more pure silk as well as some laceweight. I'm also playing with a new yarn, and I'll let you know if it works out.

I keep wondering what the American fascination (sp?) with OJ is. (Kinda like the ongoing fuss about Britney, and, previously, Paris.) We were talking about this at lunch yesterday, and my manager speculated that it's because he's a sports hero. Or was. But that means he still is. Apparently. Or something like that.

What ever happened to real new?. I don't care about OJ or Paris and they just piss me off when they go on and on about Britney being fat.

Personally, I can do without all the O.J. details, but right now I'm hoping that the Nevada caper will finally put him in prison. Also, I'm always happy to read about Mr. Goldman's relentless pursuit of any and all assets that are not shielded in O.J.s retirement accounts--such as the Nevada sports memorabilia, and "the book".

WTF cares (where "W" is "WHO", not "WHAT") when it comes to OJ? It's not news, except to maybe the Goldman's a three inch column in the Nevada papers...and that's a big MAYBE.

Perhaps focusing on Darfur would be less intriguing than fat-OJ in handcuffs, but it definite qualifies more as news.

As for Ravelry, I only have to wait until they've added 12,840 people before me, and then I can send you a message too...harumph! At a rate of about 500 new entries each day, I'll be on Ravelry in about a month...double harumph!

I bet they let snooty Berks County bitches in with higher priority than me.

A Men!
Do you have to wave all that nice yarn in my face? I'm so weak!

No, the snooty bitch hasn't gotten in yet either.
Where I hang out, we can't keep that Kaffe sock yarn in stock.
The most popular color is Fire.

see spouse's take on the latest OJ crisis at http://arteejee.blogspot.com

yes, I know, a shameless plug. but I am shameless.

I have to say, the Kaffe yarn is really fun. The colors are wonderful and it's like the first time you knit a sock with self-patterning yarn: you just can't wait to see what color will come up next.

I completely agree. Who cares about O.J. or Brittney for that matter. The media insistence to keep shoving these non-celebrities in our face is irritating....

I wonder when it started - the fascination by what should be "serious" news outlets with "entertainment" news. Or other types of useless fluff.

I get tremendously frustrated with one of the local news outlets here - there was a dangerous inmate who broke out of the local jail around February 14, and instead of talking about what was going on with that story, they had some idiotic piece on how florist's shops were busy on Valentine's Day. Imagine that.

I am so with you on the whole O.J. thing - enough already!

Can't wait for the yarn update :)