Yesterday, we celebrated my oldest kid's tenth birthday. Holy crap. I remember when he looked like this 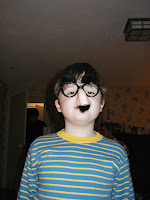 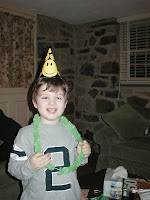 and even smaller except that my scanner won't play nice with the new and improved computer guts so I can't show you photos of the charming, nearly-9-pounds-at-two-weeks-early, pumpkin-headed, wouldn't-sleep-for-more-than-twenty-minutes- at-a-time-until-he-was-9-months-old, wanted-to-eat-every-minute infant that the OB had to get help yanking out of my stomach, he was so big and wedged in there when they decided to do a C-section after hours and hours of pushing. (At least I'm not bitter.)

Happy Birthday, Elvis! And very happy birthday, Mom. What a beautiful child- and from everything you've ever said about him, it's obvious how proud of him you are- and that you should be.

But ouch, what a birth and newborn story. Is it every first child that refuses to sleep? I thought it was just her...

Happy Birthday! He's a handsome guy. I have a ten year old son, too. It's an interesting year ;) We're definitely into the sullen tweens here. My younger one was nine pounds, too, and he's only 48 pounds now, at 7 years old. Not fair, I tell ya.

When kids turn out so well, I blame the parents completely.

Congrats on spitting out a good one (or three).

He looks so thoughtful and serious...he must get that from Tom.

Your Elvis is beautiful. Beautiful.
He must get that from Mister Silver Organza as well.

All the work it took you to get to motherhood was worth it, wasn't it? Your eldest (and the other two) are some really delightful people.

he will be breaking hearts in a couple of years...

What a handsome guy you've got there. Congrats. I'm coming to Philly around Presidents Day, are you up for some trouble of the fiber variety? Loraine (Lar's friend)

I agree with Anne Marie -- he is defintiely going to be a heart-breaker. What a handsome kid!

Feels like you've only blinked since the birth, doesn't it? Happy birthday Elvis!