One of the most gratifying things about BBF has been the chance to see what people do with the yarns and fibers that I dye for them. For example, we all know Mindy, regular commenter here, and she has done all sorts of wonderful things with her massive stash of BBF yarn and fibers, such as this lovely skein of handspun

which is presently for sale on her Etsy site. Here are some pix of two other skeins she did which I believe have already sold. 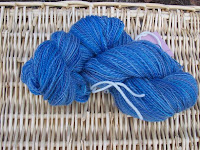 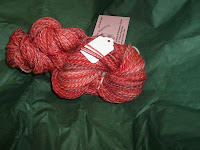 Recently I discovered Pauline -- or should I say "Pauline discovered me"? -- who sells handspun yarn on Etsy, including some BBF rovings already spun up. She graciously gave me permission to show you some of her handspuns, although I have to warn you that these particular skeins are already sold. 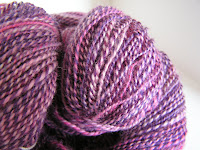 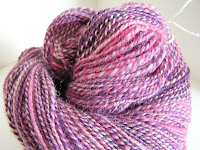 Speaking of roving, here's what my living room looked like for the last few days: 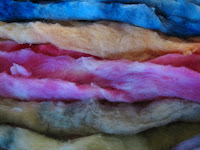 The first shipment of the BBF Fiber Club is in the process of going out the door. The fiber I used is unbelievably fluffy and lofty, so it's going out in stages. Again, I get nervous when I ship stuff out; this yarn is from a family-run farm and not something super-processed by a big wholesaler, so I hope everyone likes it. I'll keep you posted...
Posted by Carol at 10:05 AM

Oh oh oh is it out the door yet?????? So I can start haunting the PO tomorrow? I can't wait! And which one is mine, anyway?

Tell Hubby to get his buns home and come to knitting tonight. ;o)

I have to admit to coveting 1 or 2 of the fiber colors in the picture, but I'm sure I'll love whatever comes to my home.

ooh, I'd be happy with any of them (minus the pink). Less processed huh? Well that won't scare me away!

That cherry yarn WAS on sale at Mindy's site until your post. It's been adopted now.

I can't believe you did all different colors for us! That's so awesome! I can't wait to see which one is mine!

I'm glad it's going to a good home.

Thanks Carol (both of you)

HOW DID I MISS THE NEWS ABOUT A BBF Fiber Club? If there's enough for another subscription, SIGN ME UP.