Meanwhile, on a small farm in Kansas...

I'm almost done with my next book review (it's a twofer) and will try to get it up tomorrow. In the meantime, feast your eyes on some selections from tomorrow's Etsy shop update:

This is a new-to-the-Etsy shop yarn, Superwash DK, which is the same yarn I used to make Courtney's baby jacket: 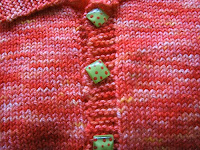 It's the same base as my Superwash Sock: 100% merino, nice twist, great stitch definition, and having finished a little sweater in it, I can tell you it's a pleasure to knit with.

I've also been working on a bamboo blend for the Etsy shop. This is NOT the same yarn that the BBF Sock Club just got: it's a different blend from a different vendor. It really does look and feel quite different, and I suspect it will knit to a slightly heavier gauge (i.e. 7 to an inch instead of 7.5 to 8). It's fifty percent merino and fifty percent bamboo. I've only got a few skeins ready for tomorrow

but I'm hoping to have more in next week's update. Nice sheen from the bamboo! Superwash, too. (The one up top is shades of brown, more complex than it looks in the photo.)

While I'm catching up, I've got my December Book Report for my bibliophiles:

I started a couple other books and ended up abandoning them; I think the hubbub of the holidays made it harder to get into books for me.
Posted by Carol at 12:05 PM

Was doing a nature vs. nurture study the deliberate reason the adoption agency separated the twins, or just an unintended consequence? Did they track and monitor the twins after they were adopted? Creepy.

Did you see the recent case in England where a man and woman got married, only to then discover that they were separated fraternal twins. Creepier...

Yes to the first question. It's one of the only studies that exists that has the perfect "control" of separately raised kids with identical genetics. They did want to track and monitor the kids in the study (there were twins and one set of triplets), and they talk a little bit about how this was done with other kids in the study. The researchers abandoned the tracking of the authors because certain of their life experiences as infants deviated, so they felt there was too much of a disparity for them to continue to be part of the study. The results of the study are locked in a university archives until 2066 b/c the researchers were so concerned about the contents and the impact on the kids studied. None of the people in the study, parents included, were told about the precise nature of the study. Today standard adoption protocol is not to separate twins, and of course the whole idea of informed consent would make this thing impossible today. I believe that some other adoption agencies also participated in the study.

I had not heard about the English case. Very very creepy indeed....

I had seen a small article about the English couple- how heart breaking for them. Can you imagine the amount of therapy? Poor things.

The seperating twins thing has to hit you hard- I know it bothers me all the more thinking about my nieces. Their relationship is so special- even at just 10 months- I can't imagine anyone purposely denying them that.

Lovely sweater, and the yarns look great. As if I need more...

Oh my... superwash dk! I might have to stalk the shop tomorrow. Those look fantastic.

I'm reading Identical Strangers right now. (No, I don't approve) I think the Louise Wise Agency made a mistake when they separated the triplets. They should have placed two together and one separately. They would have had the perfect way to actually test the nature/nurture concept. They didn't give themselves a control subject.

It is absolutely fascinating to see how closely the lives paralleled each other (and the other examples).

Liz in NoWhere PA
My DH teaches Experimental Psych. Some of it has worn off over the years...