For most people, the economy was still an issue when it comes to hobbies, although there seemed to be a bit less anxiety about financial issues toward the end of the year.  Handdyed yarns were still strong -- and at the top of the competitive market, MadelineTosh's saturation in the market was unbelievable. We saw continued interest in  organic yarns and renewable fibers; most of the big yarn companies continued to produce at least one new yarn with recycled fiber content in it.  We saw continued interest in single breed yarns and rare or endangered breed preservation (as in the Campaign for Wool). We saw renewed interest in novelty yarns, especially self-rufflers, and this helped push sales for these one-skein, one-hour projects. We also saw companies building off established yarn brands they already produced, whether to add yarns with the same name in different weights (like Cascade adding different weights to its 220 line, or Berroco adding to its Vintage and Blackstone Tweed lines), cooperating with publishers to create brand-specific books (Noro and Cascade 220 come to mind) or add magazines (Interweave began Knit.wear and added special issues like Jane Austen Knits, and Koigu Magazine hit the shelves). 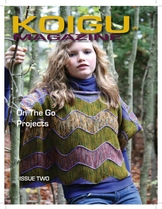 In terms of patterns, the cowl (a.k.a. neckwarmer, neck cozy, loop scarf) was huge. Quick to knit, with a relatively small amount of yarn, the cowl was a great way for knitters to try out a new yarn or use a new stitch pattern with a minimum of investment, while avoiding issues of fit.  (Cowls are also great for people who aren't good at draping or tying scarves.)   There was still interest in sock knitting, but less of a frenzy in that regard, and knitters (aided by designers like Stephen West and Brooklyn Tweed) continued to explore using fingering weight yarn for other things, like shawls, scarves and fingerless mitts.


I mentioned in my books post how there was a continued interest in lace knitting; we also saw continued interest in fair isle and cables, although no one technique dominated. Technical books put out by both mainstream publishes and the indie press helped give knitters instruction and confidence (I forgot to mention JC Briar's excellent little book on charts, for example).

One of the most interesting and exciting trends we say in 2011 was the resurgence of the knitting show. Stitches has been the granddaddy of the knitting show, having now expanded to East, West, Midwest and South venues; but this year Vogue Knitting burst onto the show scene with VK Live, premiering in New York City in January.  A second show took place in Los Angeles in September. Interweave premiered its Knitting Lab in November, and a second Sock Summit was held in July in Portland, OR.  UK Knit Nation had its second event in London, as well.

What does this burst of shows say about the industry? Lots of good things. It's a way for knitters to bring on-line connections to real life. It's a way for knitters to learn more about the craft they love so much. It's a way to rekindle enthusiasm for knitting if you've been doing it a while, and to grab hold of the energy that seems to emanate from these sorts of knit-centric occasions. Overall, the fact that so many people are willing to travel, stay over and commit a weekend (or more) to a show indicates their commitment to the craft: an excellent thing.

2011 was a mixed bag for local yarn shops. We lost way too many this past year, including Ewe and I in the Philly 'burbs and Woodland Woolworks in Oregon, which makes me sad, and a few changed hands, but we also saw the entry of some new yarn shops to help offset the losses. PDF patterns continue to be huge (for example, we saw Dale of Norway enter the PDF market by beginning to sell patterns on Patternfish) and LYSs now have to not only be educated about the patterns that they sell, but also about the hot patterns that are sold on-online, so that when knitters walk into the shop with a PDF printout looking for yarn, the LYS can help them find a suitable choice. In a clever move, the Ravelry folks premiered a yarn shop sales service, in which designers can agree to let yarn shops sell Ravelry PDF patterns through their shops.

We lost some terrific fiber people in 2011, including Judy Sumner (author of Knitted Socks East and West); 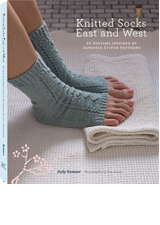 Jean Leinhauser (author of many books on crochet, and founder of Leisure Arts and the American School of Needlework); Erica Wilson, who is known mainly for her needlepoint designs but also wrote a knitting book; and Joan Vass, longtime knitwear designer. We also lost some less well-known  but just as treasured fiber folks, like Sue Nelson, who was greatly loved by her colleagues at XRX; Steve Harder, a.k.a Goat Boy, who deeply loved the goats he bred and was a fixture at shows on the eastern seaboard; and Beverly Johnson, a Philadelphia-area knitter who was like a ray of sunshine (well, if a ray of sunshine never went anywhere without her cute little doggie).  Rest in peace to all.


Although it's tempting for non-knitters to envision knitting as a solitary activity, knitters proved time and time again that they were in touch with the wider world. When Japan was struck by a horrific earthquake and tsunami in March, knitters jumped in with efforts to help. Fundraisers auctioned off knitting supplies, books and finished objects, and big companies and small designers alike donated proceeds from their profits to the Red Cross and other relief organizations. Crafters also began creating items to send to the Japanese natural disaster victims, including quilts, knitted socks and blankets.

On a brighter note, inspired by the royal wedding of Prince William and Kate Middleton, knitters could recreate the wedding party in knitted form, courtesy of Brit Fiona Goble.  Knit Your Own Royal Wedding

included directions for knitting all the major participants, even including a corgi!

Knitters were right in the forefront of technology, too, with many knitters using their iPads for crafty pursuits.  The large display of the iPad's screen was perfect for showing off photos of finished products, and knitting-related apps -- from a gauge measuring device to magazine subscriptions to inventorying yarn and needles -- started appearing at the App Store.

It's hard to encapsulate a whole year's worth of activity in a few blog posts, so I apologize in advance if I've inadvertently missed anything.  As usual, feel free to chime in with comments to share your impressions of 2011. It was an eventful year, and like most, full of good and bad.  Best wishes to all my readers for a wonderful 2012!


Special note: I'll be appearing on the WEBS podcast, Ready Set Knit, this Saturday, as Kathy Elkins and I take our own look at 2011 in the fiber world.  The podcast will air Saturday, December 31st -- go here for details.

Excellent recap! It was a good year.

Thanks for your recap...RIP for the fellow knitters and knit designers, your presence will be felt forever!!

Carol, I love your blog.... please keep writing. I enjoy your book reviews (especially Scandinavian mysteries) and knitting book reviews, and I LOVE seeing your kids grow up before my eyes. (Mine have grown, and are producing grandchildren, who are wonderful..... but there is something about the real thing.)

Please keep writing..... I miss you when your "real life" interferes with your blog!