Now that a bunch of my deadlines have passed, I have had a chance to start picking up some unfinished projects from earlier in the year. I started this quilt at the beginning of the summer. I didn't use a pattern because I really wanted to use large blocks that would show off the bright colors and patterns of this Echino fabric, whereas most of the patterns I see use smaller pieces of fabric. So I cut big blocks myself, roughly 10 x 10 inches. 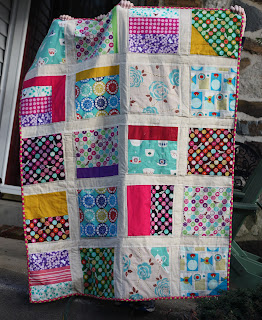 I opted for some neutral beige for sashing but thought it needed something more.  So I decided to add some little bits of solid color. I just played around with some Kona cotton that matched some of the colors in the prints, adding triangles and rectangles of color to the ten-inch blocks.

Although I like all of the bright patterns in the fabric, I think my favorite is the Viewmaster-inspired print, since I vividly remember having Viewmasters as a kid. 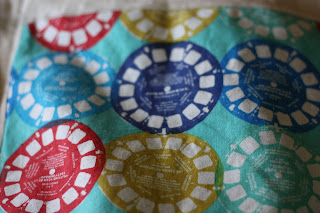 One thing I learned from this quilt is to try to be much more careful and exact when cutting blocks and sashing (and when sewing them together). I had to even out some of the edges, and realized then how lopsided some of my blocks were.

This was my first attempt at machine quilting. I decided to just give it a go, and not worry about crooked lines or other imperfections. I was amazed at how quickly the quilting went, and even though there are lots of wobbly places, I was still pleased with how my first machine quilting attempt went. 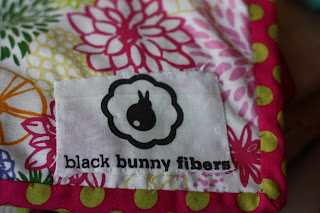 For the backing, I used half of a duvet cover that I bought at Ikea. (I'd read about this on a quilting blog and figured it was worth a try.) I used a brightly-colored dot fabric for the binding, and noticed that my binding technique is starting to improve and look more consistent. 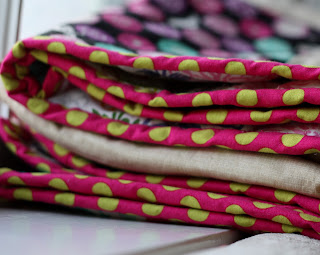 It's been really fun to get back to a more normal day-to-day, instead of being frenzied and struggling to meet deadline after deadline.  The next quilting project I'm going to focus on is a throw for my mom. I started it with the hope of having it done for her birthday in October, but that just wasn't going to happen.  So I'm aiming for Christmas.

Very nice! I like how bright and cheerful it is.

I used Spoonflower (you can get custom fabric printed up) and uploaded my logo, then had them print out a sample square. Another tip I found from a blog.....

Dear Carol ~ Please do something poorly, so the rest of us will feel better. Yours in the holiday spirit, Bridget.

Bridget, if I had known you were going to read this post, I would have insisted that my kids wear white gloves while holding up the quilt.

Lovely! That viewmaster one is perfect! I've been collecting some batiks. Oh and a warning: quilting is VERY addictive, especially wholecloth and trapunto, at least where I'm concerned.

Love this quilt! Echino fabric is one of my faves. Now that it is getting colder I keep meaning to finish up the first one I am trying to make. I jut need to quilt and bind it, but the motivation isn't there yet. Send some of your finishing vibes my way!