As I have said before, one of the most exciting things that independent publishers can do is bring knitters books that mainstream publishers won't publish.  Publishing executives who aren't knitters might not recognize the appeal or importance of technical topics, or might believe that a specific subject won't generate enough sales to warrant the substantial investment that a book requires.  Ideally, smaller publishers can make a profit on books that don't sell as many copies or appeal to a particular niche of the market, and therefore bring overlooked topics into print.


Today's book review is an example of a very technical subject brought to us by independent publisher Cooperative Press. Alasdair Post-Quinn describes himself as "a 30-something computer technician in the Boston area" who spends "much of my spare time as a knitwear designer, focusing specifically on double-knitting."  For those of you who aren't familiar with the technique, double-knitting is a way to create a piece of knitted fabric that doesn't have a "wrong" side.  As Post-Quinn explains, "Until recently, a typical double-knit fabric was either tubular or two-colored with the opposite side showing a mirror image in opposite colors from the facing side. Over the past few years, people here and there have been pushing the boundaries of double-knitting to include more complex color and structure variations."  Enter Post-Quinn's book, Extreme Double-Knitting 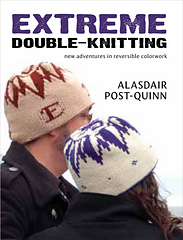 In Extreme Double-Knitting, Post-Quinn presents a primer on double-knitting as well as a collection of patterns illustrating various double-knitting techniques.  What makes the book stand out is the depth in which Post-Quinn covers the technique of double-knitting, and the way in which he pushes the boundaries of what might seem to some to be a very narrowly-focused topic.  (In fact, I can't believe someone hasn't already used that irksome phrase:  "It's not your grandmother's double-knitting!")

Extreme Double-Knitting is a paperback, just under 200 pages, about 8.5 by 11 inches, and chock-full of photographs and charts.  There are 14 patterns, plus a few exercises included.  It's not a typical knitting pattern book, though, relying much more on technical instruction and skill-building.  Let's do a GKIYH walk-through.

The book begins with a two-page introduction, in which Post-Quinn distinguishes similar uses of the phrase double-knitting (he's not referring to DK-weight yarn, or knitting with 2 strands held together, or referring to typical stranded colorwork done with 2 shades of yarn, nor is he referring to tubular double-knitting).  He then addresses the question -- not an insignificant one, he acknowledges -- of why do double-knitting rather than knit two separate pieces and sew them together. Post-Quinn cites the way double-knit fabric contains 2 layers that are anchored together and don't bunch up; the way either side looks equally good; and the freedom of colorwork without stranding or twisting.

Chapter 1 begins with the basics of double-knitting: how the fabric is made, the importance of gauge; and why Post-Quinn continues to twist his stitches as he knits them. Chapter 2 gets the knitter going with a two-color cast-on, then shows how to double-knit both with and without twisting the stitches. Next up is double-knitting flat, with three methods of working edge stitches to keep them neat, and two methods of binding off.  After describing modifications necessary for double-knitting in the round, Post-Quinn covers adding a new skein of yarn and reading charts. Last up are two exercises to practice double-knitting, one flat and one in the round. This chapter contains three patterns: the Corvus Scarf, a long muffler with a crow motif: 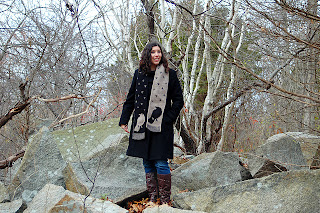 a baby blanket with a geometric pattern inspired by fractals, 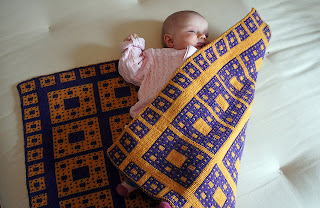 and a set of wristwarmers. 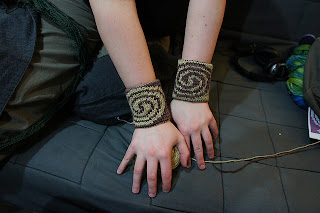 Chapter 3 introduces shaping, walking the knitter through a variety of decreases and increases while double-knitting, including helpful close-up photos of what the increases and decreases look like, and hints for handling them in charts.  The patterns for this chapter include a brimmed cap: 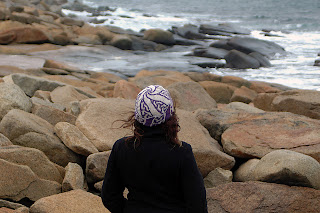 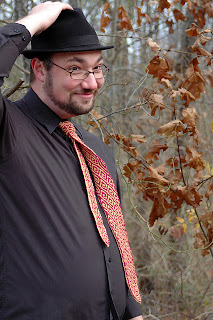 Chapter 4 teaches the more advanced topic of knitting two different patterns in the same item, combining two charts into a single one for knitting. There's an exercise given for this technique, then two patterns:  a sign that reads "Open" on one side and "Closed" on the other, and the Four Winds cap (a version of which appeared in Twist Collective). 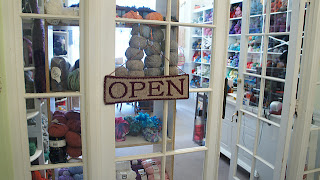 Techniques get progressively more advanced, and Chapter 5 adds a third color to double-knitting, making it...triple-knitting? Two hat patterns demonstrate the technique, including the terrific Struktur cap, my favorite in the book: 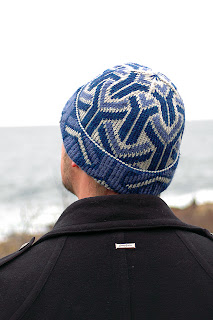 Intrepid double-knitters can push the boundaries by exploring double-knit cables, a new cast-on technique, a stitch Post-Quinn calls a "lock stitch," with patterns for another cap, a trinket box, baby booties and a buttoned bag. 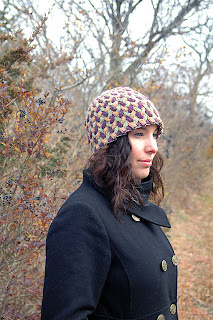 Chapter 7 covers finishing techniques, including how to deal with the double loops of live stitches at the end, and how to weave in ends when there are two "right" sides and no wrong side.  Chapter 8 gives information on how to read your double-knit stitches, how to read and translate charts, and how to check your work. Chapter 9 is devoted to troubleshooting, with common mistakes and how to fix them.  Last is an Appendix, containing additional double-knitting techniques that were not used in the book's patterns but might be useful for the double-knitting aficionado (slipping stitches, textured double-knitting, ribbing, openwork and so on). 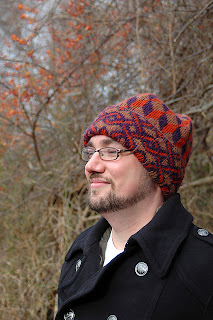 Extreme Double-Knitting is a somewhat unusual book, delivering much more technical background in a specific niche of knitting than we've become accustomed to, but kudos to Post-Quinn for delving into a topic that fascinates him and sharing his expertise with the rest of us. This book is sure to be the definitive work on the subject, and it will be fascinating to see where Post-Quinn takes double-knitting next.

Oh, man, I need to own this book. Like, seriously. This guy is obviously a nerd after my own heart.

You might like to go to today's (12/13) NYTimes and read the article by Richard Russo -- "Amazon's Jungle Logic."

Marcia
(who enjoys your book reviews)

The baby blanket is gorgeopus - I love fractals!

what a great book! my lys just had a double-knitting class, at my request. now i can really delve into this technique!

That looks like an impressive book. I've never yet attempted double knitting (with colour), and it looks like this book would be invaluable at learning the new skills.

HOLY CRAP! I think I need this book. Really really. There are a lot of patterns out there that I like, and will knit, but not so many any more that flat-out INTRIGUE me. And I don't even generally like doing colorwork.

P.S. My captcha is "untato." I think I'll start using that instead of "peel" for the action of removing the skin from a potato. As in, I need to untato 5 spuds for supper tonight. :-P