Brace yourselves; 2036 isn't that far away

I try not to tell too many "aren't my kids adorable?" stories. I mean, I know they're adorable, and most of you probably don't give a rat's ass about their latest pwecious widdle wemarks. (That's what grandparents are for.) But every once in a while comes a story so amusing that I think it crosses familial lines.

A few days ago, my kid's teacher gave the kids a map of the United States with no state names in it. They were told to try to write in the names of all the states they could. My kid was very proud when he wrote them all in, and handed his paper back to the teacher. She praised him for a job well done, but pointed out that he had transposed the names of Colorado and Wyoming. James, being (ahem) both competitive and anal-retentive (can't imagine where he got those traits from...), was a little irritated, and he said, "Well, I did get them all." As he walked away, my kid muttered under his breath, "When I'm president, I'm gonna switch those two states."

Welcome to my world.

I listened to my first podcast yesterday. I tried downloading the latest broadcast of Cast-On, in which our beloved raconteur and all-around good guy Franklin is the guest host. I'd never heard a podcast before, and I wasn't sure I could even get it to play; instead of loading onto an Ipod, I downloaded onto my computer, then burned a CD so I could listen to it in the car. Shockingly, it worked exactly as I had hoped, and I listened to the podcast on my way into and home from my Rosie's shift yesterday.

I give the podcast two vigorous thumbs-up (and not just because Franklin mentioned my name and blog in it). I loved the intimacy of it, the way it sounded like Franklin was sitting in the car next to me, telling charming knitting stories. I liked the way the podcast featured essays from other writers, and an eclectic mix of songs (like when a friend gives you a "mix tape"). I will definitely be listening more to Cast-On.

I finished another quickie scarf for the kids' silent auction. I'm about to turn my attention back to a cropped cardigan that I was working on in Classic Elite Premiere. It's embarassing to admit, but I find that when I put something down and work intensely on something else, I am almost bewildered when I return to the original project. Tonight, when the urchins are in bed, I'm going to sit down with the pieces (I've finished the back and am halfway through one of the fronts) and my notes and figure out where I am and where I'm going.

I've added a few more things to the Etsy shop. I've got some roving (I really should call it top, because that's what it is, but whenever I write "top" it looks so weird to me) -- two different greens and a golden-y orange one (named "Guacamole," "Butternut," and "Basil Leaves," respectively). 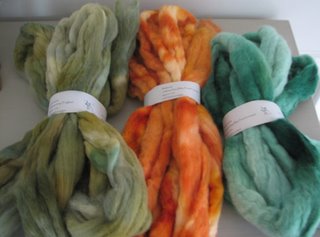 I've got a batch of laceweight in a gorgeous blue, sort of periwinkle-ish, which is my absolute favorite color in the world. This is another 880-yard skein, and I've been thinking about trying to knit something up myself in one of these skeins. 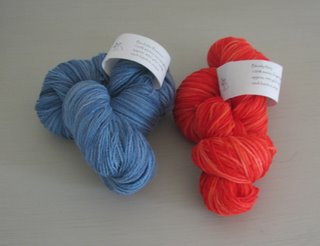 The other is a skein of fingering-weight merino, about 440 yards, in shades of a red (tomato red, not cool red). I've priced it a little lower than usual since I'm not crazy about the particular yarn I used and won't be using any more of it. I'm going to play with some other fingering-weight wools until I find something I like better. Don't get me wrong; it's still a nice skein and would make killer socks or a scarf. (I call the colorway "Bloody Mary.") It's really a dyeing thing, so don't hold it against the yarn. Besides, at a lower price, it'd be a great way to try my stuff...

Yesterday, at Rosie's, I found a Fiber Trends pattern for a very, very easy shawl knit in the round with lace edging; the laceweight version calls for 900 yds., so I'm going to give it a go and try to swatch today. I have held back an interesting-looking ball to play with myself, so I'll let you know how it goes. In the meantime, I am working on bigger batches of laceweight, for those of you who need more than 880 yards, which isn't enough for a really complex or large shawl.
Posted by Carol at 1:23 PM

Hey Franklin, is that a nostepinne in your pocket or are you just happy to see me?

You really need to quit waving that yarn around under my nose - I'm moving and CANNOT buy more yarn right now. Must. Resist. The. Blue. Laceweight.

How many times have you watched Chicken Little this week?

You have to listen to the early episodes of Cast On too, because Brenda is really great. She has such a radio voice. I haven't listened to Franklin's episode yet, but I have it downloaded on my i-Pod so I can listen tomorrow as we fly to Cabo! PS. Your skeins are lovely. I'll check out your Etsy shop when we get back.

I'm convinced that James would be doing a FAR better job at his age right now than our current president is doing. I say move to Washington. Or move Washington, whatever. Just kick Bush's ass out of there and I'll be fairly happy.

I've mentioned this before, but I not only love the yarn you're creating, but the photography of the yarn. It's so rich and beautiful.

Thanks so much for sharing this story--I still have a smile thinking back to my early days. I think that your son & the mini-me have a lot in common.

But can he do something about those darn Dakotas?

I love it! You just keep right on with the kids stories whenever you need.

I'll have to try and download the podcast- does that stuff work ok on dial-up?

Hey Carol, can locals pick up Etsy orders in Rosie's instead of having it shipped?

Your yarn is so beautiful. Holy smokes. Yeah, I'm fawning. I do that when I'm impressed.

When your little one is president, I have a few more geographic requests for him, please, including one to do with the climate in Chicago.

Hen, tell James I'll vote for him for sure if he can get New Jersey to disappear without my having to go to prison.

Sherry - Sure! Instead of paying right away, you can ask me to invoice you, and I'll knock off the shipping cost, then you can use paypal. Thanks!! I'm also going to be bringing in some "exclusives" to sell at Rosie's.

Excuse me, us Coloradoans do not want to become Wyomians. It is boring there and very flat and when I was little I was reading in the car, and when we drove through Cheyenne, I totally missed it because I was at a good part in my book, and didn't look up in the 3 minutes it took to get through it.

In defense of poor Wyoming, I'd like to point out that it was the first state to allow women the vote.