I came, I kvelled, I conquered: Friday

Okay, here's the full scoop on my TNNA experience. Or at least the first part of it.

I began my journey at an ungodly hour on Friday morning. Hastened out the door by a mopey, self-pitying kid -- his mother had the temerity to leave town for a whole weekend! -- I arrived at the airport early. I hadn't been to the Philly airport in years and was pleasantly surprised by all the changes that have taken place. Not the least of which is increased security. I was a bit chagrined to realize that security was so improved that I couldn't even get a lousy cup of coffee without my boarding pass, which Lisa was bringing with her.

My traveling companions, Lisa (owner of Rosie's) and Laura (fellow staff member; her wonderful alligator mittens pattern appears in the first Stitch N Bitch book), arrived and we proceeded to our gate. Lisa, who has a much more professional and tailored style of dressing than me, busted on me a little for traveling in my mom clothes, but my fresh-out-of-the-minivan look certainly got me through security quickly. I was the most pleasant person passing through the metal detector. I would gladly have stripped nekkid if I thought it would increase my personal security on the airplane. (Thankfully for my fellow passengers, this was not part of the new Homeland Security protocol.)

The plane ride to Indiana was really not so bad. Don't get me wrong; I don't want to fly anywhere again any time soon, but mellowed by an Atavan and buoyed by excitement at getting out of Dodge, the ride went pretty fast and was quite pleasant. Laura and I were momentarily concerned when we noticed that the pilot appeared to be about twelve years old; however, we caucused and quickly came to grips with the situation. Laura noted that pre-teens tend to be athletic and spry, and isn't that a good quality in a pilot? I offered up my personal observation that no one can handle complex electronic equipment -- cell phones, DVD players -- like my eight-year-old, so the pilot's youth would serve him well with the controls. Thus comforted, we returned to our game of "Spot the Air Marshal."

Our hotel was perfectly nice and roomy. All of the rooms overlooked a center atrium 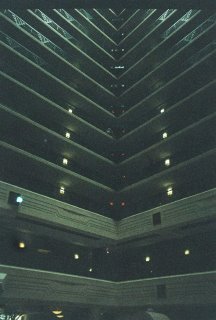 and although we saw this peculiarly-worded sign alerting us to construction, 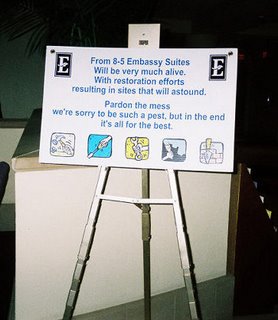 we didn't hear any jackhammers. After a quickie lunch, I collapsed into the king-sized bed and snoozed while Lisa and Laura scoped out Mass Ave Knitting, a local yarn shop. They returned with high marks for the shop, which apparently had an unbelievably large selection of yarns.

One of the first fellow TNNA-ers I met just happened to be from a very small town -- we're talking pretty obscure -- just a stone's throw from where I grew up. (For the terminally curious. she's from Noxen, PA and I triumphed over, er, grew up in Wilkes-Barre.)

Friday night was the big TNNA Fashion Show. Or maybe I should say "Fashion" Show, as many of the items shown were neither fashionable nor garments, as far as I could tell. The Fashion Show consists of submissions from TNNA members, mainly from large yarn companies but also from some smaller producers and pattern designers. The entrants, and there were many of them, ran the gamut of handknitting. I saw novelty yarn extravaganzas, a set of traditional Norwegian ski sweaters, a gorgeous Koigu coat, a ball gown knitted in Kid Silk Haze, felted bags, sweaters galore, and even a skirt or two. It's really impossible to generalize about them, since they seemed to sample all sorts of styles and genres and certainly would appeal to vastly different knitting populations. On the one hand, you see a striking black and white car coat from Vogue; then you see a monstrosity that has pompoms clustered on the top of the sleeves and shoulders like ... well, I don't know what it was like, but it wasn't a very attractive look. There weren't many of them I could imagine making (I don't get invited to many balls, such that I need to knit full-length gowns that often) but it was interesting to see what's out there, and what some of the new yarns look like in a garment. Favorite quotes from the fashion show:

* "It will flatter all figure types" (hah! said variously about a tent-like garment with no shaping and the aforementioned Vogue car coat, which was styled with diamonds on the chest which would become parallellograms if anyone with a chest bigger than size 34 should wear it)

* "This turquoise and tangerine cocoon jacket...." [No good comes of a sentence that begins that way]

We had dinner and returned to the hotel, plotting our strategy for the next day. I managed to knit some of this: 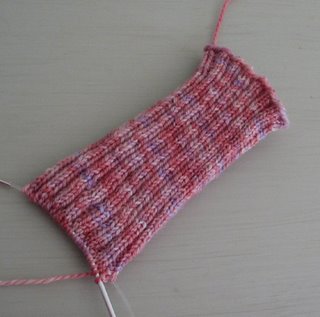 which is BBF's Grandma's Roses, the portion of the skein which got nasty and knotty and tangled when I tried to wind it, so I kept the shredded remnants for myself.

Although it had been a relatively light day TNNA-wise, I was already feeling the excitement of being in the company of numerous other knit-geeks who love yarn and knitting as much as I do.
Posted by Carol at 1:24 PM

Pom-poms on shoulders? Sounds like something one of the Wicked Witch's guards would wear. Huh.

12 yr old pilot? I was treated at the ER last week by his 11 yr old brother. Should there be some sort of guide lines for people in power? Must shave? Does't have a curfew? Mom doesn't pack his lunch (in an x-men lunchbox)?

Bravo--sounds like a wonderful time depsite the nasty Lyme issue. As for the traveling in "Mom" clothes--first, you are a Mom so you might as well credit for the hard work you do. Second, I used to think that I should "dress" for travel. What that got me was sore feet, discomfort and not much else. I say we should all travel in our favorite pair of PJ's!!!

Sounds amazing! I can hardly wait for the next installment... my mind is whirling trying to imagine the sights... a Kid Silk Haze ballgown? Wow.