It's funny how even a casual relationship with someone can touch your heart. Last fall, a new family moved into the neighborhood. Their daughter, Antarra, was in one of the twins' first-grade classes. Antarra's grandmother came from India to stay with Antarra's family to help care for Antarra while her parents were at work. Each morning she would bring Antarra to the bus stop and each afternoon would be there to pick her up.

Over the course of the year, Antarra's grandmother became one of us. She didn't speak tons of English, but she could understand more than she could speak. We admired her spunk: just imagine being a 74-year-old woman who picked up and moved halfway across the world for six months, without speaking the language, or knowing anyone except your son's family, in a culture that was very different from your own. She got a kick out of us and our kids. I looked up some Hindi on teh Google and learned how to say "good morning" and "namaste." 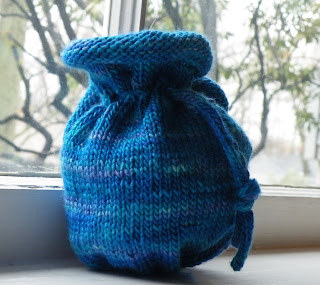 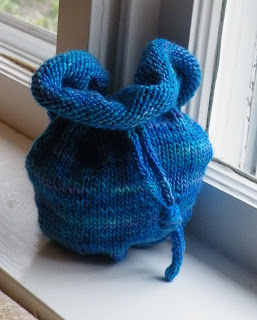 She seemed to like it and she definitely understood that I had knit it, as she made knitting motions with her hands and said "Very good." (I had consulted with some Indian-American knitters on Ravelry as to what she might like, and they voted for bags and deep colors.)

Safe journey, Antarra's grandmother; we will miss you. 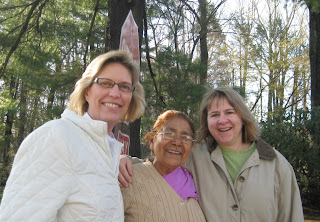 Another word of Hindi that I learned: "dost" = friend.
Posted by Carol at 8:38 AM

That is such a lovely thoughtful gift! Just imagine what a better world we would be living in if everyone learned a few new words on Google and extended the hand of friendship...

What a wonderful story! Thanks, Carol, for sharing it with us.

Very sweet. Now you've got an idea as to why I loved India so much. So many wonderful people like that.

And the feminine for dost is dosti: दोस्ती

What a nice kindness. She will remember you with fondness, I think.Thanks for telling us about her.

Aaaaawww. Thanks for such a sweet and sad story. I'm sure all your readers will wish her well. I know I do.

Gorgeous gift and wonderful story. Safe travels to her and I hope she can visit again soon.

What a great story and gift to go with it.

Lovely story, even lovelier gift. I would not be surprised if the bus stop meetings were one of the true highlights of her time here.

You are a beautiful woman - I'm sure your gift and thoughfulness are appreciated.

It is amazing what a loving grandmother will do when needed by the family.

Lovely story Carol. Thanks. I'll bet there will be a lot of sadness in that family when the plane takes off.

Years ago when my kids were in elementary school, I drove a carpool to the school. A friend asked if I could make one more stop to pick up Natalie. Natalie's Vietnamese grandmother brought her to the pick up spot right on time every morning. They were the nicest people. Where would the world be without grandmothers to hold everything together?

So sweet of you!! That's one of the things I love about knitting. The ability to whip up something as a gift for someone special.

That was a lovely story, Carol. It is so easy to let people enrich our world, if we only make the time for them.

Linda
(who should learn from you)