Shampoo should not smell like motor oil. Even if it is free.

We quickly settled into our hotel (I always let my dear husband make the travel plans; he picks places that I would have ruled out as way too expensive...) and between the indoor pool, the dinner-plate-sized shower head and the room service breakfast (just coffee and one bakery basket; don't want to have to dig into those college funds to pay for breakfast), the kids had the time of their lives.

I have been expounding to Tom my theory that this was a hotel designed by men for men. To wit: 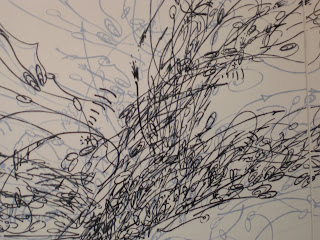 (this is a large wall installation that cannot be anything other than a fabric panel scribbled upon with Sharpies)
Not complaining, mind you -- it's a very, very luxurious place and we had a blast. (We have been debating whether the newfangled shower without a shower door is also male-centric, my theory being that women feel vulnerable in the shower and like an enclosed space, whereas Tom thinks that Janet Leigh's shower door didn't do her much good.)

I have not been to Washington, D.C. since the early 90s, when I was sent here for some kind of document review back in my lawyer days. It's really fun to see the city through fresh eyes, and through the eyes of my kids.

Day 1 (which was only a half-day after driving and checking in and having lunch) was a trip to one end of the Mall to enjoy the sunshine and see some of the monuments: 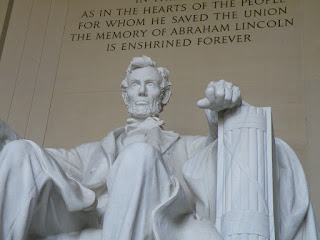 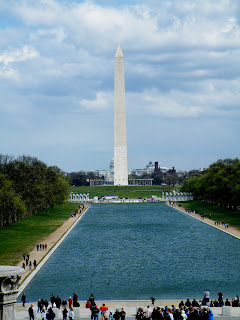 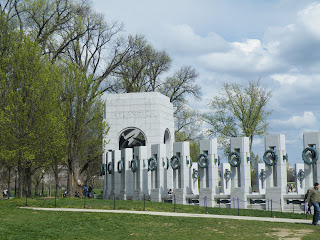 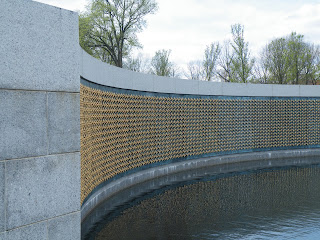 The above two shots are the relatively new (2004?) World War II monument. We were a little skeptical of it until we got to it and walked around. By the time we'd read the very moving quotations from that time, seen the battlefield names carved into stone, and looked at the friezes showing the struggles faced by ordinary Americans, 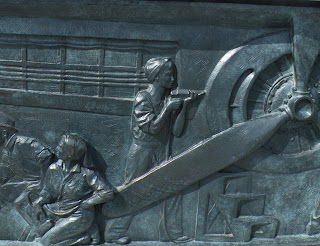 we decided we quite liked it. That is Rosie the Riveter above; yes, I did earnestly search the friezes to see if there were any women knitting socks or helmet liners, but alas, this did not seem to be included anywhere. (I mean, really, is the Charleston more culturally significant to the war effort than knitting? I think not.)

I found the Vietnam War Memorial especially moving. It's interesting to think about how controversial the memorial was considered initially, and how integral a part of the Mall it feels now. Seeing each name etched in the dark wall is incredibly solemn, and seeing other people around you experience it, like the man taking a rubbing here 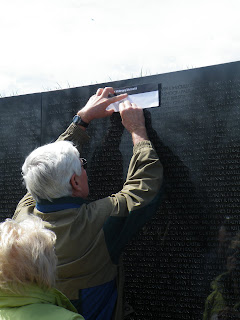 made me nearly blubber out loud. 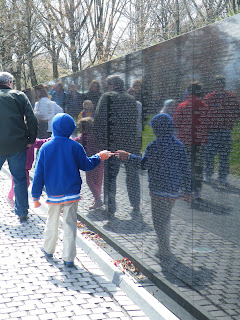 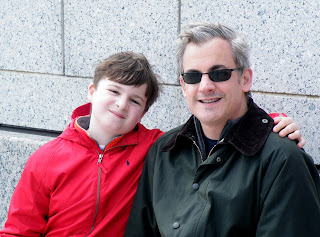 Our second day began at the Air & Space Museum 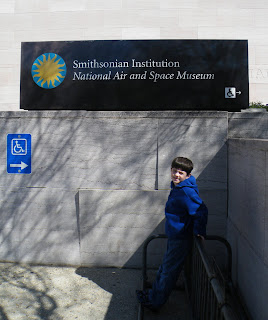 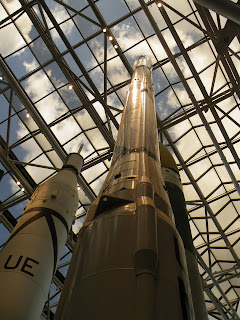 but it was very, very crowded and probably a little too old for the twins. They were more excited about the McDonald's in the museum (sigh): 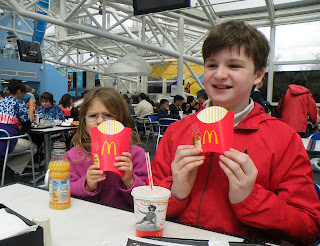 We then walked the Mall some more, heading toward the Capitol: 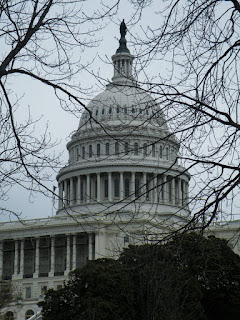 and made an unexpected detour into the Botanical Garden that was off to the side near the Capitol. Miss Thang enjoyed posing (here, she is vogueing in the cactus room): 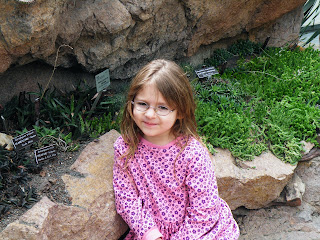 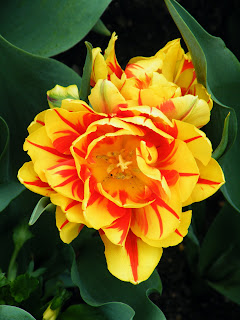 More swimming and a delicious dinner of Thai food helped us recharge.

Today was our last day. We headed over to the Smithsonian again, to the American History Museum. The twins lasted for a while, long enough to see some of the cultural treasures, like the adorable dollhouse: 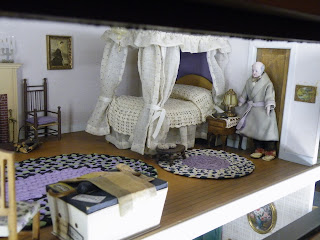 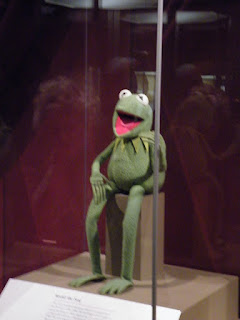 and the ruby slippers from the Wizard of Oz, and the Seinfeld puffy shirt, and of course the Steven Colbert portrait: 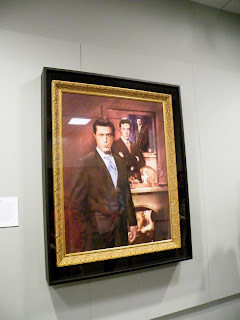 We circled back to see the White House 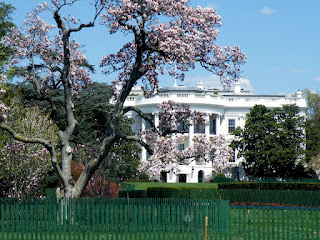 (although, sadly, there was no Obama sighting), and then, after our drive home, we were reunited with The Bun: 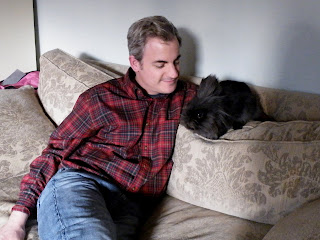 All in all, a memorable and enjoyable trip, although we are all glad to be home.
Posted by Carol at 6:22 PM

Oh wow, that is a great photo of a Man and His Bun! (Plus, I think it's the first time I've been able to see Charcoal's whole person, as it were.)

Great pictures! I'm going there next week. And the sharpie art is too funny.

With regards to the room design, there was an article in the LA Times recently about hotel rooms being built with glass bathroom walls which allowed a full view of absolutely everything happening in the bathroom from the bedroom/rest of the room. It's too creepy to even link too. I too think that only men could possibly be arrogant enough to think that such a thing would be okay -- no woman would deprive herself of privacy. The architects did indicate that these rooms were supposed to be for couples already very comfortable with each other. It sounds like a good way to ruin a relationship to me.

I'm happy to hear you had a good trip. Lucy is pouting because she heard you were in town and she didn't get to meet you . . .

Having a husband who has been in the hospitality industry for almost 20 years: the color scheme can be changed easier when it's neutral; the coffee table book was probably chosen out of a book of 50 others equally as interesting; edges are easier to repair than curves; and mirrors give the illusion of room (although they are a bitch to polish). There have been times that I despise my husband's knowledge as he does a quick run through of the hotel rooms before he takes off his shoes. If things aren't "correct," he asks for a new room . . . multiple times.

I've always loved the Vietnam Memorial and the Museum of American History! Did you see Julia Child's kitchen? We're overdue for a trip back to DC with the girls.

The botanical garden is a hidden treasure and quite lovely.

Has Charcoal forgiven you yet for abandoning him so cruelly?

(wait- did you stay in the hotel where my daughter found a Sharpee and escaped our room???) (just kidding- they can only find Sharpees at home...) Sounds like a great trip!

When I was in Toronto last weekend, I stayed at a B&B that had an open shower. There were actually 2 different shower heads that could be operated independently. The stall had walls about 5 feet high, and an open doorway. Except for a bit of water splatter though the open doorway, the set-up operated smoothly and was really really nice to get into. I have a shower in my tub, so have the problem of the shower curtain brushing against me while I'm in the space....which is rather limited, given my size. I'll take the B&B arrangement any time.

Word verification is "kersiv", which seems the name of a funky typeface.

Went to DC also when ds was in third grade (what age is that again?)- is what a great time for us all and him. It was right before the implementation of heavier security measures so things were a bit more available to see. He laughs how I had to go "the room" at the Capital and managed to bypass the block long length of people waiting...thanks for sharing your trip! Terry

did you know kermit the frog was made from jim henson's mother's winter coat?

I remember when I first saw the "ruby slippers" I was VERY disappointed; I always believed there were real rubies, not sequins, on those shoes. how naive of me, but how clever of hollywood to dupe an innocent young girl.

I hope charcoal has forgiven all of you; if not, he will post his displeasure on "disapproving rabbits"!

I love the poignancy of DC monuments. Those and the museums make it a good place to road trip. I'm sure your kids will have tons of great memories of the trip (shampoo excluded).

My husband and I worked on some of the aircraft you saw in the National Air & Space Museum. Going there is like old home week, with all the NASA Dryden aircraft hanging from the ceiling.

Did you touch the Moon rock?