Allow me to introduce another pattern in the BBF line: Gitte's Socks. 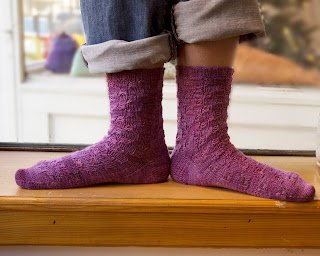 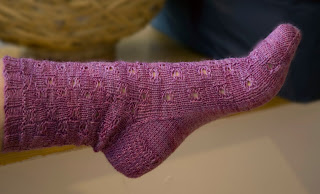 One amusing anecdote: I did a photo shoot with Bridget as my foot model in Rittenhouse Square. (The photos I took weren't usable but this was entirely due to my skills as a photographer, rather than the beauty of Bridget's feet. The lovely photos you see here were taken by the uber-talented Laura Grutzeck.) We were snapping photos and Bridget was striking poses, and a woman walked by with her boyfriend and Bridget heard her ask, "Are they anybody?" We of course cackled at that. But we didn't pay her too much mind, because us Somebodies try to ignore the Little People as much as possible. 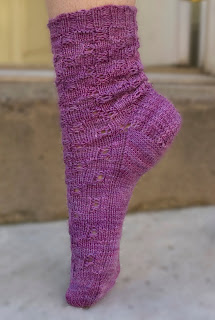 You can find Gitte's Socks on Ravelry here or Patternfish here. I'll be adding some hard copies to the BBF store soon, too.
Posted by Carol at 6:12 AM

I love the way Patternfish describes this pattern!

and YES, you and laura and bridget ARE somebodies!

I guess I'll have to wait for the modeling agencies to call me until my next opportunity. Good thing I didn't sell the house ...

The socks are lovely, just the right amount of fancy without being too frou-frou.

Those who have to ask if you are somebody don't deserve to know!

First, I like those socks. I really like that cool stitch on the heel that I could see when I clicked "for a closer view".

On being someone:
My 3 70 year old Aunties were at a bus stop years ago. They were so alike you'd have thought they were triplets. And they were dressed the same.. ankle length fur coats, feather hats (standard winter wear for the Prairies back in the day) but were in Vancouver where it was well above freezing. Some guy came up and said "Are you sisters? Should I know you? Are you famous?"
Auntie looked around to see if anyone was listening, and whispered "Ssshhh, we're from Mars. But don't tell a soul".

You could have said loudly "They don't recognize us! I told you this would work!"