Fall is traditionally the big season for knitting books to come out, but another of the advantages of the current renewed interest in knitting is that knitting-related books come out at all different times of year. This past week, I was able to redeem an Amazon gift certificate that I gratefully received for my birthday and get some new knitting books, which I shall review forthwith. (The only thing I miss about being a lawyer -- other than the paycheck -- is getting to use ridiculous words like "forthwith." Which I really didn't do much anyway, since I was a big "plain English for lawyers" type of gal, but phrases like "inter alia" and "sui generis" stuck in my pointy little head so humor me.) Today's book review is one for which I have a personal connection (and I'm not just talking about my ample ass). 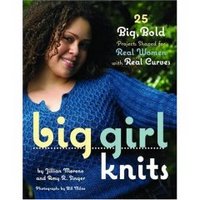 Okay, forget all objectivity: the thrill of seeing my name and pattern in print, in a real live book, eclipses everything. April 18th marked the release of the somewhat painfully-named Big Girl Knits, to which I was a contributor, albeit a small one. So even if this book sucked nine kinds of ass, I would be hard-pressed to say something mean about it. Thankfully, I am spared that ethical dilemma, because it's a good book.

You all know Amy Singer and Jillian Moreno from Knitty: Amy is the editor and Jillian is a frequent contributor and if I'm not mistaken, helped instigate the founding of the influential on-line magazine. Both are what they euphemistically describe as "big girls," and they've written a book devoted to knitting for ampler figures.

The first part of the book is techniques and tips for knitting for a more endowed figure. There's much breathless tittering from reviewers about the "3-B" formula: boobs, butt, belly (perhaps because some aren't used to seeing the word "boobs" in print?) but knitting books that provide instruction on how to adapt patterns for different kinds of figures, especially ampler and/or curvy ones, are long overdue. Even experienced knitters might learn a thing or two about pattern adaptation from this section.

The rest of the book consists of patterns, sized for a wide range of plus sizes. You can take one look at the models and see that we're not talking about coy little size 12s that simply look plus-sized compared to the scrawny, boyish size 0 models we're used to seeing. These are big girl models, which gives the book a sense of legitimacy that other "plus-sized" patterns lack. And for anyone who's looked at a pattern and groaned to see that the size "Large" was for a woman with a 38-inch bust (Vintage Knits, anyone?), you'll be happy to see a size range that extends up -- way up. Of course, patterns are a matter of personal taste, so you'll probably end up loving some and feeling indifferent about others, but still, it's a great selection of patterns ranging from accessories to sweaters and jackets, and a lovely shawl. And my Chinese Menu Handgear pattern, which is a completely customizable pattern for mittens and gloves, is versatile enough for anyone to use. I would like to knit some in a variety of yarns to show you how different the pattern can look depending on what yarn you use (add that to the ever-growing "Knitting To-Do List" -- hah); the constraints of using a nubby tweedy yarn and only having a photo or two to show you means that you can't see some of the detailing in the different cuffs.

as well as some Blue-Faced Leicester roving in two palettes of green. Also in the picture are two batches of some organically-grown wool roving from a Montana farm. This stuff is so soft and lofty that I may have to try a batch of it myself. 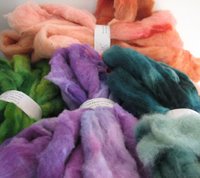 I've been putting the Black Bunny stuff at the bottom so those of you who are disgusted by shameless cross-promotion and crass commercialism can just skip it.
Posted by Carol at 1:19 PM

The book is good, but I had chosen to boycott because of the name. I am fat damit, just say it. It's ok, I won't eat you. And maybe if you do just say it, it will stop being such a bad word in this society.

Now that I know you have a pattern in the book, I face an ethical dilemma--to buy a book that panders, or support a great blogger. I suspect I will throw my $s in support--always more fun to be positive than negative (despite it being easier to be negative).

I have been debating buying this book. now I WILL buy it, and not just because you are part of its creation.

remember, freddy mercury sang "fat bottom girls, you make the rockin' world go 'round." AND WE DO, TOO!

I love that book, and not only because I got war fuzzies when I saw your name Carol! (I made Aaron run across Borders so I could show him your little bio. The silly boy didn't understand how cool it was that i know someone who wrote a pattern for such a great book!)

Its the first book in ages that I've wanted to make everything in it. Even the skirts...no matter how ridiculous the yardages are!

I think it's thrilling that they've made a book not only for real "ampler" figures, since as you say the average woman is now (I think) as size 14! It's even more exciting that they used truly plus-sized women who are absolutely beautiful, instead of claiming size 10 and 12 are the upper limit. Not all size 0's are anorexic and gaunt though...but I totally realise that's not what you mean. Healthy, real people size 0's would usually be size 6-8-10 if we were taller! It's when you get a person who's 5'10" into a size 0 that it gets scary.

I'm with Cynthia. I'm fat and I've got at least a chunky butt and big boobs. The tummy isn't great but it's not as big as the others. So call a spade a spade. I would have.

But I will check it out and buy it because I support my Black Bunny girl. And that BFL is beautiful. I got my shipping notice for Pansies. You know I'll be spinning it asap.

I'll be checking out the book at MD (4 more days!). Weather channel is now saying thundershowers and 71 for Sat. That'll change.

Can you do the Shamrock in more yardage? (My name is Mindy, and I'm a yarnaholic...) Oh, and how much more of the organic wool do you have?

Mindy, for you, I can do anything. I was going to email you a JPEG to show you some pinks. What kind of yardage do you want?

I have another 8 oz. of the organic roving -- and some sportweight wool from the same farm in Montana... also from the same place, some wool with a low percentage of mohair (haven't dyed any yet).

Thanks, Mar, you da bomb.

I'm fat - no thyroid activity = fat. I can't wait to check this book out at MD and hopefully meet you there. Would you sign it for me? Pretty please?? I'm always looking for larger size patterns, and customizing patterns because they don't come big enough. Hurray for fat bottom girls!

Shameless cross promotion? Crass commercialism? Heck it's your blog so post anything you want!

On more important news I'm on the heel flap of my sock in some wonderful berry hand dyed yarn. Yummy yarn. Everyone who sees it falls in love with it. So keep dyeing Carol!

Hooray Caro! Can't wait to take a peek at the book and your swell mitts! One thing I'm thrilled about is that no matter how bad the actual title is, they didn't go in for that "knitting for real gals" crap. Real gals are whatever size the gal in question happens to be--seems like everyone thinks they're realer than the next.
Now me, I'm surreal.

Lady, I am just so tickled for you. It's just one more testament to your design talent. And in a book with a *point,* no less. Congratulations!