I am physically exhausted, but my mind is bursting with ideas. I got back from Stitches Sunday night (with a nasty cold, no less) and am still processing all that I saw and did. It was the first year in several that I didn't work at the show, and I must say, I really enjoyed being freed from the booth. I was able to play and I needed that.

I was a bit nervous about acting as Véronik's handler for the weekend, but suffice it to say that we got along like a house on fire. (She brought me a bag full of Canadian chocolate bars unavailable in the U.S.! How considerate is that?!) If you think I had a total crush on her before, well, you ain't seen nothin' yet. [And after hearing about her fabulous actor husband all weekend (he looks a little like Liam Neeson, only younger and way hotter), I think I have a crush on him, too.] Apparently the rest of the world shares my affection for Véronik. After the first few people recognized her and gushed, I began the official Véronik Gush-o-Meter: 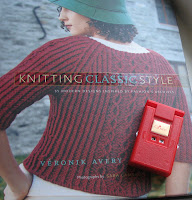 Every time someone complimented her on her designs, I Kacha-kacha'd.

Charcoal -- who had never met a Canadian before -- was on his best behavior. He apologized for the fact that our president is an evil moron; he refrained from making any disparaging remarks about hockey; he did not hold Véronik personally responsible for Céline Dion simply by virtue of her nationality; and he showered Véronik with bunny kisses (which he's never done to anyone outside the family before). A superlative rabbit, indeed.

My overall impression of Stitches East -- and I've been attending pretty steadily for the past ten years -- is that this year there were fewer vendors and fewer attendees. Not that the X-Men give a rat's ass what I think, but they really need to consider moving the location again. I enjoyed Baltimore but from what I heard people talking about, the traffic (there always seems to be a Ravens game the day Stitches lets out) and the lack of parking (would it kill them to put up some more signs?) have deterred some folks from coming. I also noticed that a lot of vendors north of Baltimore didn't have booths. Even Philadelphia, which is a mere 2 hrs or so away, only sent one yarn shop, and places from New York City and further north weren't well-represented. I'm biased, of course, but I'd love to see the show return to Philadelphia, at the Center City Convention Center. Downtown Philadelphia has changed a lot and there is more than there ever was in the way of hotel space, restaurants, and a clean, revitalized downtown. It has much better access via train, too, and it is very easy to come from New York, D.C. or Baltimore to Philly for the day by train and return the same day.

My shopping was, on the whole, rather restrained. My big splurge was some garment design software that I was overdue to have invested in. I got some Socks That Rock yarn, and I scored a bag of Jaeger Extra-Fine Merino in a raspberry pink that would be perfect for G. for $35, which felt almost like stealing. (Bless you, Webs.) I met lots of nice folks and saw a bunch of people that I'd met at yarn conventions before, too, so that was really fun. I especially enjoyed seeing my pals at Westminster Fibers, and bought about twelve of the Nashua pattern leaflets that I had somehow missed. (Note to L.P.: did you steal this one from a Viagra ad?) 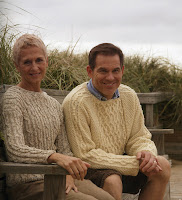 
And when I got home, there was a new station wagon in the driveway. I kid you not. While I was at Stitches East, my husband got a new car.* Um, I have to go now: there's a knitting machine I suddenly feel no guilt about purchasing.


*Okay, the lease was up so we had no choice, but work with me, people.

Hurrah for a knitting machine! I love mine even though it's only a USM. Go for a good one!

Thanks for the Stitches review. I'd love to see it come to Philly too.

As if I need another reason to go to Philly...

I would love to hear about the software - which one is it? Will you do a review?

I agree with you - Philly would be a much better place to hold Stitches. I'm out on Long Island (about 50 miles from Penn Station), so Philadelphia would be fine for a day trip. Into Penn Station on the LIRR, then out on AmTrak - a pleasure to do. Baltimore is too far for day-tripping.

I can't wait to see Veronik's book in person at Rhinebeck.

Do you really want a knitting machine? I have four, and I don't like them at all (that does not include my antique sock machine).

Hadn't the Westminster Fiber folks stopped going to Stitches for a couple of years? It seems the last time I went (about 5 years ago???) they weren't there at all.

PhilaPa would be a most excellent location (I live in central Jersey), however, I doubt Stitches will ever be there--it is a union town. So far, I am 99% sure that the X-men are avoiding using union venues.

I agree that the show had fewer vendors and seemed less crowded. Baltimore has plenty of parking and traffic is not that bad--if you realize you are in a city and that yes, more than one event was taking place (got to class a touch late on Sat. morning because I stopped to watch a bit of the marathon--not a hardship at all.

I desperately wanted the Veronik book, but alas, by the time she was signing, my budget was busted (that is one complaint I have about Baltimore--wine is really expensive, as is food...but the wine--damn, insane expensive at three different places). I will pick it up ASAP when the bank is replenished (I just left the field of Financial Analyst to be an inner city public librarian--it is a whole new world and means that knitting stuff will not be instantly aquired any longer...unless it is for the knitting group at the library).

PS I am the person who gave you and the blog a shout out while you were walking with Veronik in the Inner Harbor.

They said I just missed getting a chance to meet you in the booth. But, I did bring home some of your BFL. You know, to help pay for the knitting machine.

Cynthia, I'm so glad you said who you were! You have no idea how much that made my day.

Sorry I missed you, Margaret, but thank you!

And to Kristen: My next review is coming soon. Yours.

Well, I'd still rather have Stitches stay in Baltimore, if it doesn't come to Philadelphia, 'cause then I would still at least have a chance to go.

I am quite jealous of Veronik, getting kisses from Charcoal - that would definitely be a highlight for me.

And can anyone tell me why her husband has to be so good-looking? It doesn't seem fair somehow ... though I would rather it was the case with someone nice like her, than a lot of other people I can think of ...

That guy's grin is just scary, and who wears shorts with such a heavy sweater?

I bet they wanted to show off his legs AND his sweater...

If Stitches would move to the Philadelphia Convention Center, I'd go to the market, if nothing else, as I live here!

Dude, you got a new car too? Kewl!

I wish I went to stitches and got to hang with the knitterati, but I was at Bingo Night at the Elementary School.

I'm sorry, but I'm feeling once again that Véronik should get EITHER the immense design talent OR the incredibly sexy husband.

However, it doesn't seem too much for you to have both the new car and the knitting machine.