Single-mindedness is all very well in cows or baboons; in an animal claiming to belong to the same species as Shakespeare it is simply disgraceful.

I ordered a few vials of Gaywool dye (okay, that's enough snickering from the Franklin peanut gallery; I didn't name the stuff) based on several recommendations I'd read. Gaywool is made by Louet, and comes in crystal form. Mordant is incorporated within the crystals so you don't have to add a separate substance to set the color; however, the directions do recommend heat-setting it by simmering on the stove. Best of all, I didn't notice any chemical odor during or after the dyeing process.

I began experimenting with the six different colors I purchased: two shades of pink, olive green, a forest green, indigo and plum. (In case you're wondering why those, I picked the pinks so I could compare them with the pinks I can get pretty readily using food coloring, and the rest because they are colors I can't get as easily with the food coloring.)

My first set of experiments were with the immersion method: you put the yarn in a metal bowl with water, then sprinkle the crystals over the top of the yarn, immersing the yarn in the water as the dye starts to dissolve. Then you let the yarn simmer over low heat for thirty minutes. I put a splash of vinegar in the water and let the hank soak for a few minutes before I started adding dye.

My first batch, using the two pinks and the plum, looked like this when I scattered crystals over it: 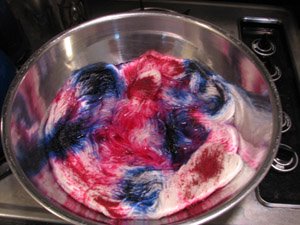 and after the crystals dissolved, it started to look like this: 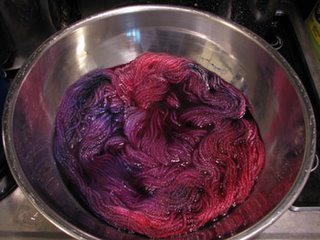 Upon rinsing and drying, it came out like this (hank on the right): 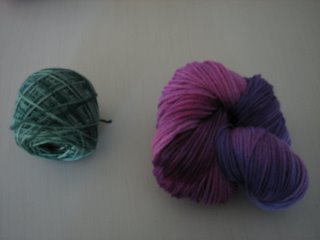 My second batch used the two greens, same method. Once again, the ultimate color scheme was deeper than I had planned, at least in places. Here's what the dark green looks like knit up, in hat form: 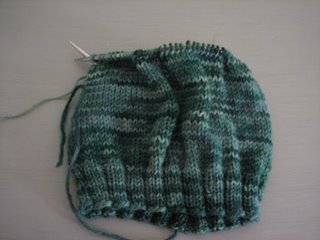 Lesson number one: Need to use less dye unless I want really deep shades, and be especially careful with deeper shades of dye -- a little goes a long way.

At this point I switched from aran-weight to fingering-weight yarn. Here's where it got frustrating. The sock yarn, using only the pink Gaywool shades, with a tiny dash of plum, came out like this: 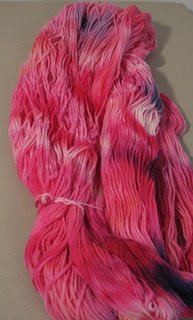 Yes, the shades were lighter, but in spots the dye hit so lightly I got some nearly white patches. And although I was using two different shades of pink dye, I was disappointed that there wasn't more differentiation between them. I may overdye this in order to even out the splotchiness. Chalk this one up to experience. 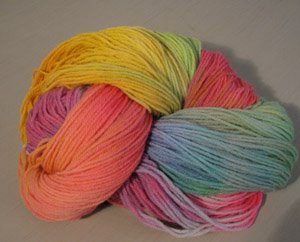 Not quite as impressive than the first rainbow skein. The transitions between colors weren't as smooth and the colors didn't take as strongly. I tried a range of blues, and was less than thrilled with that. Same problems: splotchiness, unevenness, lots of dye running out in the rinse.

I gave it one last try: oranges and pinks, with a bigger splash of vinegar to try to get better color saturation. This, I like. 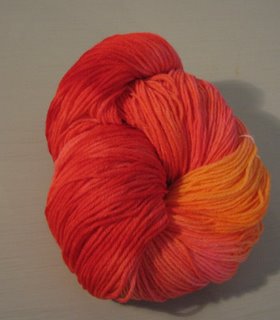 I have decided I don't like the fingering weight wool yarn (which was all the same brand, from an on-line retailer whose name rhymes with Snit-Licks). It didn't seem to take the colors as well as the thicker yarns I was using and much more dye washed out in the rinse. I suppose it's possible that the thinness of the yarn or some unknown factor (more lanolin? different bleaching process?) may be affecting my results. I'll have to find an alternate supply of fingering-weight, undyed wool that isn't shriekingly expensive and see if I get better results with different wool.

The next day, I reverted back to thicker yarn and decided to play more with the Gaywool dyes. I used some worsted weight yarn (Paton's Classic Wool) and played with the concentration of dye in the water, keeping the overall shades on the lighter side. I love this periwinkle color, done with a relatively dilute concentration of the Indigo, and was pretty pleased with this skein (although it looks like it needs its hair combed). 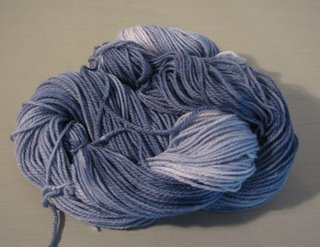 This yarn is definitely destined to become a cap for the Ship's Project, since it looks like camouflage -- unless it knits up so ugly that I wouldn't want to send it. I used the plastic wrap method, with each shade of green in swathes across the skein. I had a bit of bleeding together, but overall, not awful. The olive color isn't my favorite, but I guess it's all part of the experimental process. 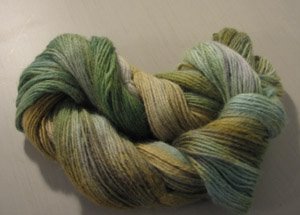 After playing a little more, I decided I like the Gaywool dyes and will definitely continue using them to expand my color ranges, although I will still use food coloring/Kool Aid too.

What do you do with all this yarn?

Daryl wants to know what I plan to do with all these skeins of yarn. I have to say that I will not be making any oven mitts. I finished the pink scarf for myself with one skein and will probably knit another scarf or two with some others. I owe mittens to each of my kids, and since the weather is getting chillier again in Philadelphia, started a quickie pair for James (yeah, like I need to start a new project). 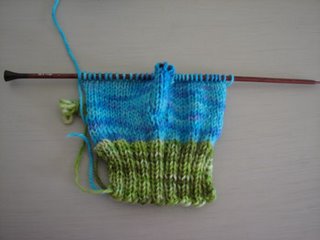 I'm going to make at least one pair of wristwarmers for myself, and the rest? I will probably do one or two hats for Afghans for Afghans and The Ship's Project, so long as the colors are appropriate and I can be sure some poor sailor won't take his hat off only to find green dye in a ring around his buzzcut. I may play around with the odds and ends to make a sweater for Grace using stripes and/or fair isle patterning, switching from bright color to bright color. Needless to say, I am also looking forward to Leigh Radford's book on One Skein Knitting, due out in April. And there's always socks.
Posted by Carol at 10:19 AM

I haven't tried the Gaywool dyes yet. I have gotten great results with Cushings.
Wilton cake dyes work well also, though the royal blue and the purple have split on me a couple times. Not everytime, just a couple.
Have you tried direct dye painting yet for the sock yarn?

Very nice - I have the dyes on my list to get and it's great to see someone post a "lessons learned" about them. I've been a Kool Aid user up until now. I loooove the color combo on the wristwarmers!

Denise, tell me what you mean by "direct dye painting" please. Can there be a new technique I haven't tried yet?

I just recently tried Kool-aid brand drink mix dyeing and my colors were not as saturated as yours. You're getting great results! I definitely need to try the vinegar rinse next time.

Are you scouring your wool prior to dyeing? This can really make a difference in the way the wool takes to the dye...

I have not been washing in detergent or anything, although I do soak it in warm water w/vinegar.

Carol, after reading this entry, I just want to dye!

Thanks for sharing! I've been bound to Kool-aid at home (little people) but have used Cushing and like at a friend's studio. From what you've done though, sounds like the Gaywool may be doable here. (is doable a word?) I rather like the dark greens, the periwinkle is lovely, and though I'm not a fan of olive- I do like that skein. Now, if you really don't like the pale rainbow, I receive mail at...

I tried to find links to some sites that had pictures of what I'm talking about. I lost them since my great computer in October.

Anyway, soak the wool in a vinegar, little dish soap and water solution for about an hour. Mix the dyes in containers. I use these squeeze bottles.http://www.dharmatrading.com/html/eng/3393-AA.shtml But, I've seen others use turkey basters. Spread plastic wrap out on counter or table, you plan to dye on. Gently squeeze out the excess water from the yarn. Then lay out the yarn on the wrap. Carefully, apply the dye to the areas you want on the yarn. Also, becareful about what colors you place next to each other, otherwise you get a muddy brown when they bleed into eachother. ie reds or pinks next to greens.

Roll up the yarn in the plastic wrap like a jelly roll. Then either microwave for two minutes on then ten minutes rest, four times. Or, you can put in a 175 degree oven for about a half an hour.

Let the yarn completely cool before rinsing in warm water.

I hope this helps. If you anymore questions, let me know, and I'll send you my e-mail address.

Now that I'm totally spamming your comments, here's a blog entry with pictures showing what I'm talking about.
http://www.folkcatart.com/knitaround/2006/02/dyeing-as-group-activity.html

Now, I do have to tear myself away and go dye some yarn myself. LOL

I love these dyeing posts. Thank you for sharing your experiments with us!

A question: the few occasions I did the Kool-Ade dyeing, I ended up with yarn that smelled fruity, and I couldn't get this to go away. Is this the case with your yarns? Any tricks you can share if you figured out a solution?

Love the pink/plum, girly, and the orange/pink and the camouflage.
You're certainly leaving me in your wake.
Can I have some of your experimental yarn, seeing as how I'm so gooey and complimentary and all?

J'ai arrive! Kathy wants some of my yarn.

My dollah-three-eighty: Get yourself Deb Menz's book Color in Spinning. She has an excellent technique for handpainting the dye that I've been wanting to try. A great book, whether you spin or not.

Wow, I had no idea the yarn could turn out this beautifully by just sprinkling the dye crystals over it...;-) great colors!

Wow, beautiful dyeing. I've fooled around with Kool-Aid and Wilton dyes, too -- not wanting to poison my cookware. Are the Gaywool dyes "safe" too? Moderately safe (okay to use my kitchen, but should have their own cookware)?

I learned to dye yarn recently and now sell my yarn on Ebay. I've had very good luck with Sabraset dyes. Prochemical has some kits with everything you need for from $13.00 - $23.00. The kit goes along with the Book Color in Spinning but you don't need the book.

The dyes are safe; you need to wear a mask when mixing the powder with water to creat a concentrate, but one that's done all you need are gloves.

The link to the web site is: