For the Musical Purists

Okay, there's been some question raised about whether Mozart actually composed "Twinkle, Twinkle, Little Star," or if Haydn did. Legal eagle Mary W. sent a link which indicates that neither technically invented the tune, it being an old French folk ditty. [Er, Mary, should you be researching classical music or billing time that will translate into salary for my husband, a.k.a. The Man? Hmm?] However, both Haydn and Mozart apparently were inspired by the tune and incorporated it into their work.

Which leads me to wonder: if it is an old French folk tune, will M. Benoit Bourque cover it on his hurdy-gurdy?

We can only hope.
Not.

On Bowling and Etiquette

Of all the social rituals practiced in our civilization, the birthday party for young children is by far the most revolting. It must be endured, however, because it is a learning experience. ... It is the parents of the birthday child who learn most from the experience, sometimes such handy information as the replacement value of their property. The smart ones also learn quickly to find sites for the parties other than their homes.

My kid had his 8th birthday party -- the one for the kids from his class at school -- on Sunday afternoon at the local bowling alley. Apart from the emotional trauma caused to Tom and me by a bunch of energetic eight-year-olds hyped up on cake running amok with heavy bowling balls in their hands, the party went very well. The kids are at such a sweet age, in many respects. They are still young and innocent enough to let loose and have fun together, and seeing that look of unbridled joy on my kid's face was wonderful. At the same time, you can see hints of things to come -- a blonde girl who swishes her long hair in a certain way, a particularly tall kid who is starting to get a little bit of that preteen, I-haven't-grown-into-my-body-yet awkwardness -- that tugs at your heartstrings.

And there are always the characters. The kid who shows up in some strange fleece hat that looks like it has Rasta braids and refuses to take it off. (His mother informs us that he won't ever take it off, and in fact she has had to purchase several identical hats in order to properly launder them.) Once I found out the kid didn't have lice that he was trying to hide, I was perfectly at ease with the idiosyncratic hat thing.

There was the already-impressed-with-herself girl with Ugg boots. When asked to change into bowling shoes, she thrust out her foot showily and whined, "But I don't know what shoe size I am!" "Look on the inside," I muttered.

The behavior of children at a birthday party is not necessarily a result of their being badly brought up. Group dynamics nullify the results of discipline, and six well-behaved six-year-olds are the social equivalent of six hundred angry Bolsheviks.
-- Id.

It goes without saying that the kid who began the lovely game of blowing the party noisemakers all the way out his mouth and across the room in a spray of saliva was the one whose mother confided -- as she picked him up at the end of the party -- that he was recovering from strep throat.

Parents ... learn rehearsal techniques, as they instruct their children on that great social skill, faking pleasure, as it is applied to duplicate presents and wall-flower guests.
-- Id.

The best part, however, has been the process of writing thank-you notes. Now unlike some famous bloggers, I am a pragmatist and don't really expect my kid to follow the intricacies of proper etiquette in writing thank-yous. I'm more concerned at this point with him understanding that if someone gives you a gift, you should thank them for it and if you don't open it in front of them, you need to write them a note.

I am letting him do them on the computer -- purists, please forgive me, I am weak -- and so we had some heated conversations about exactly why a thank-you note that looks like this

isn't suitable. Stickler that I am, I insist that a thank-you note must be legible to the recipient to count.

We then traversed the gaping crevasse of tact. Many an adult has failed to scale this great divide, and so it did not surprise me to see a note that looked like this: 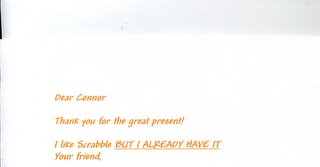 How difficult these lessons are to teach!

Can you stand more dyeing talk?

I had to include these two photos of some other Kool-Aid/food coloring dye jobs. The attempt at a rainbow progression pleased me, 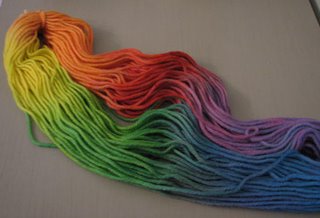 and the glorious array of colors on my humble drying rack (which is at least fifteen years old and still going strong) brought a badly-needed lift to some grey January days. 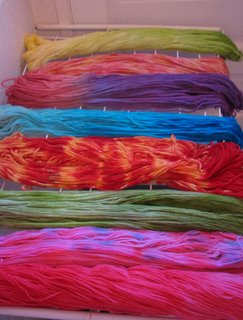 I will confess, dear readers, that I did, in fact, purchase some Gaywool dyes. After reading how easy it supposedly is to dye with them, I simply had to try them. I am in the process of figuring out how to best use them, and I'll report back in a few days on what I find out.
Posted by Carol at 10:30 AM

What I want to know is what you are going to do with all the wool you have dyed so far? We got hooked on dyeing this summer, but other than oven mitts, I can't quite figure out what to do with the skeins we have. Daryl

I handwrite my thank you letters, and I use fairly large script when writing to my elderly relatives. (I don't have beautiful penmanship. It's legible, but it won't inspire a font or anything.) My mom has snarked at me for at least a decade about what a lousy person I am because don't type my letters. She even photocopies typed ones sent to her from my cousin. She puts sticky notes on them (multiple notes!) to remind me that my handwriting is BAD, that I'm INCONSIDERATE to write notes the way I do, that I should type my letters LIKE THIS ONE. (Yarrgh...) She sucks the joy I get out of writing to my aunties.

Anyway, you just reminded me of that. :D And, I like your dye job. I'm partial to the red one with orange blips in the center of the photo.

Those yarns are lovely and thank you notes are atrocious! Especially, the one where the kid is practically yelling, "But I already have it". You can almost hear "You nitwit" tacked on to the end.

Yep, Brie, that's my kid, in a nutshell.

Now listen, don't cast me as a latter-day Procrustes.

The one thing I learned as a kid was that if you write good thank-you notes to key grownups, it makes people want to give you more stuff. Talk about a motivator.

Of course, yes, the quality of the notes makes a difference. I sent what I thought was a nice check to a kid who was graduating from high school - I didn't know him too well, but was friends with his mother - and got a note that said "Thank you for the check, it was very nice of you even though I got some that were much larger."

I snicker a little at the thought that you're making rainbow shades with Gaywool dyes. It just seems so appropriate.

Wearily, I sigh. I understand literary license and all those conneries, really.
But, ma mie, Benoit plays the accordion, the bones, the feet, the mandolin, the jaw harp, the recorder and sometimes the guitar.
He does NOT plat the hurdy-gurdy.

Thanks for the photo, though.

Gorgeous colors. I am newly in love with dying fiber, and look forward to your review of Gaywool.

BTW, your post on fiber snobbery was top notch. I actually laughed out loud (maybe I was just tired, but your ban of the phrase "peace out" was hilarious). You made my day, I'd have you know. =)

Will you please let us know how you like Gaywool dyes?

When my multi-color, self-striping merino plying experiment goes completely wrong, I want to experiment with some of the KnitPicks dye-your-own sock yarn using my color combinations.

Since I have no experience in dyeing (unless you consider dropping a glass of grape juice on a white rug "dyeing"), I rely heavily on your experience as an amateur as well.

That rainbow yarn you dyed is BEAUTIFUL! My inner child loves and covets it.

Can stand all the dyeing talk you can dish out! Those skeins make my needles itch...

Ahhh your post on the birthday party took me back to my days as a stay at home mom. I think for my youngest daughter's 8th Birthday party we decorated individual gingerbread houses for each child to take home.

WHAT WAS I THINKING? It actually didn't turn out too bad, the kids had fun. I only had those little decorative silver balls rolling around my kitchen floor until June.

The things we do for our kids...that they still remember when they grow up.

That's true, Ann. When I was five years old I asked my mother for a Snow White and the Seven Dwarves cake and she delivered. It was gorgeous, with a little forest of pine trees she made using green frosting piped over ice cream cones.

About 25 years later, I was making Thomas the Tank Engine cake for a five-year-old's birthday and made the trees the same way. When I told my (normally very stoic) mother, she said "You REMEMBER that cake?" and just about lost it.

Ahh. My 8 year old turns 9 on the 18th and we're having a bowling/slumber party.

I HAD put the upcoming stress out of my mind. Until now.

Luckily we're limiting it to 3 friends for the 8 year old and 1 for the 11 year old for a total of 6 children - the amount of extra, non-front-seat-seat-belts in my vehicle.

You've given me an idea for a blog post, though, about the time I had a party for 27 5 year olds (I only expected about half to come). Shudder.

Hey Carol.
I researched the pressing twinkle twinkle question on my own time. I swear! Love the blog. Don't sweat the cleaning issue. HIRE SOMEONE. I will bill more hours. . .

Your dyed yarn is beautiful, especially the rainbow ones; also love the camouflage skein.

This is the first time I'm commenting here, although I read you often. I had to let you know I almost did a spit-take when I read the second thank you note. Here I am, reading along and thinking that the first note, although hard to read, showed creativity and style. Then, I maximized the second note. HA HA HA HA HA HA HA!!!!