Somebody whose name begins with an "M" -- Maggie? Meghan? I'm sorry, but I can't find the comment now -- asked about a worsted-weight, machine-washable, matte cotton. The best option I can think of is Rowan Handknit DK Cotton (which I've always thought is a stupid name since the yarn knits squarely at worsted weight and I've never seen a Rowan pattern knitting it at 5.5 to the inch). I've used Rowan Cotton for kid sweaters and blankets, and always been very pleased with it. I launder it in the machine on cold and dry flat. Debbie Bliss has a similar version of it if the colors don't suit. If you can hold out a few months, and heavy worsted doesn't bother you (i.e. 4.5 sts to the inch instead of 5), Mission Falls is returning with their cotton (and their wool, too). Apparently they found a new mill and are resuming production. K1C2 has Cotonade, which is very much like Mission Falls cotton; listed as heavy worsted, but I think you could get 5 to an inch with it it, and I think it's machine washable. Last, scroll further down if you don't mind self-striping; I'm knitting with a matte worsted-weight cotton but it self-stripes in bright colors, so it may not be suitable for what you're planning to knit.

Apparently, Saturday is "Teach Someone To Spin" Day. (I have no idea who decided this, and I doubt it was Congress, but what the hay.) Coincidentally, this week my oldest kid asked me to teach him to spin on a drop spindle. Realize that this is a joke, to some extent, because I drop-spindled for about a day before realizing I really wanted to spin on a wheel. I set him up with some roving and a drop spindle. Lo and behold: 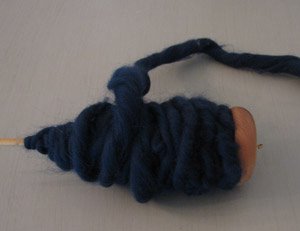 Now where did I put that set of US# 47 needles?

In the meantime, inspired by Marilyn's beautiful spinning -- and her cogent time management advice -- I decided to blow the dust off my wheel and try to spin a little bit each day. I found a bag of some kind of roving (I'm guessing it's some of that Colonial top that is sold at various spinning places and on Ebay) and began spinning away. I've been a start and stop spinner for a while now -- I start for a few months, then I stop for a few -- and it's interesting to me that when I go back to it, it seems easier and easier each time to get up to speed. I've got a bobbin full of this lovely red Colonial 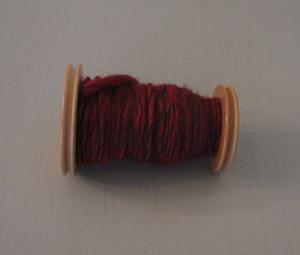 and when I fill the second bobbin, I'll ply it.

Marilyn joked that I was a "stealth" spinner since I haven't blogged about it. This is mainly because I hadn't been spinning much lately. For what it's worth, I have an Ashford Traveller wheel, which I bought about three years ago. I can understand why really good spinners like Loopy think it's a very basic wheel -- it is -- but the price was right and it is so easy to spin on. Quite nice and understanding for a first wheel. (See how I'm already acknowledging there'll be a second wheel somewhere in my future?) I also confess to being reluctant to show my early spinning efforts. I'm sure my technique is crappy and I know my yarn is lumpy, but there is something unbelievably relaxing about spinning, so I'm going to swallow my pride and post about it anyway. In fact, spinning on a wheel would be just the thing to de-stress an extremely talented, photographer/knitter/writer/artist, sheep-loving Harvard grad who works in Chicago and hates his job.

You may notice I blog a bit less about some of the projects I'm working on than many other knit-bloggers. Sometimes it's because I have fantasies that my projects will get accepted for publication and most places frown on projects that have been shown in public before, even in progress on blogs. Right now, however, I'm working on two projects for RosieKnits, the Rosie's Yarn Cellar in-house line of patterns.

One is a kid's spring sweater in Katia Jamaica yarn. This is a worsted-weight, matte cotton that self-stripes. Here's what it looks like so far. 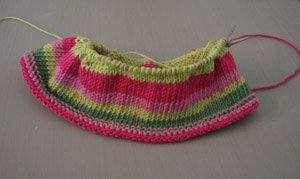 The other is Classic Elite Premiere, a blend of pima cotton and tencel (tencel is one of those man-made natural fibers, as I call them: it's from a natural substance, a plant fiber, but it's created through a manufacturing process that involves extrusion). It's delightfully soft and the robin's egg blue I'm using is lovely. I can't get a good photo of this, but I'll keep trying.
Posted by Carol at 3:18 AM

LOVE your son's drop spindling! Once I sat down at a wheel, I never touched the spindle again. Everyone's early spinning is lumpy/bumpy. My teacher refers to it as "designer yarn". She also told me to try to spin 15 minutes a day until it feels natural. Please show us your plied when you do it. So, what is the next festival you all will drag Franklin to? I figure one more festival should start him down that slippery slope...

Why do I crave watermellon all the sudden?

I am SO proud of you! Keep at it, you'll be a spinning fool in no time. Just do a bit each day and practice, practice, practice. I'll even offer to come down to PA and give you a lesson if you want. But better take me up on it before I go back to work, if I do.

Tell James that Auntie Marilyn is awed by his spindling and that her first effort wasn't nearly as good.

And that Katia is just the thing for a certain 13-year-old in my life.

Oooh, the Katia yarn is lovely. Not crazy about cotton typically, but this would be great for a couple of items I'm planning. I've never heard of Katia before, so I'm off to Google it. Thanks! My husband bought me a spinning wheel when we were first married and awfully poor. He just thought anyone as fiber obsessed as I am should have one. I did bring it out of the attic, now that my kids aren't going to ruin it (okay they're 17 and 19 (years, not months)). So, I look forward to any experience you want to share about newbie spinning.

I really like the colors in the Katia. Very clear. I wonder what they have in manly shades for butch ol' thang like me.

Great yarn...I think I need to do some Googling!

Geez, ladies (and Franklin), don't sprain your Googling hands: Rosie's Yarn Cellar has Jamaica and although it may not be up on the website yet, you can email Lisa (lisa at rosiesyarncellar-dot-com) or call (215.977.9276) and order it -- she'll charge you only actual shipping, no handling. Tell her I sent you.

p.s. to Franklin -- there's a very Hilfiger-like red, white and blue combo, and a blue/chartreuse.

You are such an enabler. I managed to restrain myself when I saw the Jamaica in the store but now I see how well it knits up...