Only because Bridget made me and I love her nearly as much as life itself.

Six Weird Things About Me:

1. I have an uncanny ability to identify voices, such as commercial voice-overs and lead singers of songs. Even when the voice belongs to someone relatively obscure, like a bit actor or one-hit wonder rock group.

2. When I was seven years old, my family lost everything we owned when the Susquehanna River overflowed 38-foot-high levees and flooded my hometown during Hurricane Agnes. Rescue workers rode boats over my two-story house. (Aside: Now me, I say this is merely unfortunate, and not weird. Maybe because nearly everyone I know from my hometown had the same thing happen. But my husband says this is officially weird. You decide.)

3. When I was in kindergarten I had a Miss America metal lunchbox.

4. I learned to read at a young age (three). My father taught me by sitting me on his lap with Guns & Ammo magazine, and helping me sound out words like "Win-ches-ter." Because of my precocious reading skills, my parents’ neighbors would call me over to have me read random articles from the newspaper, as a kind of parlor trick for their dinner parties. I distinctly remember reading an article about marijuana, which I mispronounced “mary jane-ah.” The dinner party guests were highly amused. (Probably having just smoken some mary-jane-ah. This was the the late 1960s, you know.)

5. I was a childhood model. My father owned a small company that produced educational filmstrips and he frequently photographed family members to use as part of the filmstrips. If you've ever seen scintillating programs like "Fun With Magnets," you may have seen me. 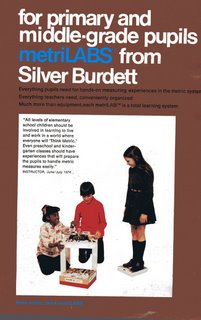 Yep, that's me in the knee socks. Oh, the horror! I often wonder what would have happened if the US actually adopted the metric system. Perhaps I would have a trust fund, a McMansion and no consumer debt...

It is a unique experience to lose everything, or at least, was unique until last year...I experienced a severe hurricane, and count it as among the most frightening, disruptive experiences in my life.

I just have to decide what I like more - the Miss America lunchbox or the childhood modeling info.

Oh, and I really do love you too, sweetie. (But not in the way that makes Jesus puke.)

This is the best "weird things" list I've read to date :-)

A bomb shelter? I have spent a disturbing amount of time imagining how to go about building a bomb shelter in our back yard. It always gets way too big because of all the little luxuries we'd need down there, and then it extends to under the park across the street.

So cool. A bomb shelter. Do you ever go in it? What is it like? Did you guys build it or was it already there?

1) My husband has the same voice recognition ability--I've never known of anyone else with it until now.

2) I am pretty sure I saw that film strip at least five years running in grammer school. I went to Catholic school and they didn't really spend much on learning aids from year to year.

3) Bomb shelter is the coolest thing--I always wanted one in my yard!

This is great. I didn't know I knew, through the web, a celeb.

Thanks for some entertaining weirdness.

If you still have that lunch box, you may be able to start a trust fund.

Inquiring minds want to know if you guys actually put the bomb shelter in or it came with the house. If you had it put in, that would be even more weird!

Wow, the Internet is cool. The girl on the Magnet film is on a blog I read! HeeHee. You probably don't realize just how interesting I find this, but it's cool. I also think it's neat you have a bomb shelter. Do you have skeins of yarn out there, just in case?

I would call all 6 pretty interesting! No shit! A bomb shelter? That's a post in itself. Mary Jane a I'll never get over that!

(1) I am scared of heights, water, and tight enclosed spaces

(2) I sleep with a teddy bear at night

(4) my ex-husband was a transvestite; I didn't find out about it until 5 years after we were married

(5) I do not watch television EVER

(6) I like baseball AND the three stooges AND monty python AND beavis & butthead [yes, I have a warped sense of humor]

Can we have some pics of the bomb shelter? Please?

Not sure which would be more tortuous to me...having the world of reading opened to me via the violent portal of gun knowledge, or having a perpetual image of me standing on a scale for children everywhere to see....shudder!! I must say you look absolutely adorable in all your 'Partridge Family'-influenced glory! Then again, speaking of disturbing...there is the Miss America thing...hmmph! Feminist my ass! I think you should have a bomb shelter class trip for your blog readers! Everyone can drink Tang when they arrive!
Loved this list!

No wonder you love Bridget:

"Oh, and I really do love you too, sweetie. (But not in the way that makes Jesus puke.)"

Now I know where you get some of your material...this blog entry was entertaining, but I want Bridget to guest blog from you sometime...I don't know we could tell the difference.

Wait...so you're not a real blonde, ma blonde?

Joe, Bridget has her own blog. It's already funny.

Only my hairdresser -- and Tom -- know for sure.