After thinking a bit more about Lisa’s post, I thought about the publishing process – or at least the book-proposal process. Having pitched several book ideas to various publishers, I can tell you that one of the things most publishers ask for as part of a proposal is for you to tell them what other books address the same topic and what your target audience is. This seems to me to be mostly to give the marketing team – who are unlikely to be knitters – a feel for whether they think your book will make money. And examining previous books, marketed to the same audience, to see if they sold well would be a logical starting point.

I suspect – although this is purely speculation on my part – that a bunch of publishing companies who didn’t historically put out craft books looked at the sales figures for Stitch N Bitch and said “Holy crap! We’ve got to get us some how-to-knit books for younger women and make some money off this phenomenon.” And perhaps this is why we see so many books that strive diligently, often painfully, to be “hip” and “funky” and aimed at “chix with stix.”

However, when you have to pigeonhole your book by likening it to previous ones in order to appease the marketers, you may end up with a book that is just like all the other ones. Or you may have a great idea for a book, but the publisher decides your patterns are too hard for beginners, or that no one wants to do a provisional cast-on, or that maybe we should put in a simple scarf or two for people who want easy stuff, and then your book morphs into something else entirely. Or maybe your book is good, but it gets “spin” that makes it sound like a bunch of other books and it’s overlooked.*

This may be why I tend to really like books that come from a handful of publishers who specialize in craft, and particularly knitting books: Interweave Press, Stewart Tabori and Chang (the editor used to be the editor of Interweave Knits), and Schoolhouse Press (run by the inimitable Meg Swansen) come to mind. When your publisher really knows knitting, it's able to take a chance on a topic that maybe hasn’t been done a zillion times before, but has a lot of merit (Estonian Folk Knitting, anyone?). Or it's willing to print yet another book about Andean folk knitting, because they know it’s a fertile ground for inspiration even if it seems obscure to non-knitters. Or they want to make sure a knitting book classic, like the Barbara Walker stitch treasuries, remain in print, even if they don’t sell a gazillion copies every year and the author isn’t around to do a promotional appearance on Knitty-Gritty. Or they are willing to pump up production values and cherry-pick designs from numerous authors in order to end up with a high-quality volume that may be more pricey than a black-and-white paperback, but is much better value for the knitter. (Say, Handknit Holidays?)

You know my motto: these things are usually more complex than they might first appear.

But I’m still sick of people insulting my intelligence and maligning my poor grandma. Even if the stash of craft magazines I inherited from her contain gems like this: 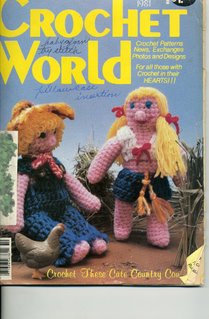 damn, that woman could crochet.


*Please rest assured that as I’m working with a wonderful publisher right now, I am not meaning to suggest that any of this is happening to me. So far, so good.
Posted by Carol at 11:26 AM

The scenario you described is so close to what I think happened to an associate of mine. Her nice, kind of unique designs, were melded into a chix/stix book with funky graphics. What should be for the long run may end up on a remainder table sooner than later.

Missed you in SD. Had a good time with Lisa and Courtney.

My husband worked in publishing for years, and he would often say things like, "They want to change it so much, it will be a whole other book."

If you're not the one in charge (money-wise), I guess a lot of the time you're out of luck.

P.S. Carol if your publisher is mean to you, just let me know. I know "people."

Right on back atcha, Linda, I begged Lisa to let me come next year. But I'll see you in June, never fear.

Sounds like a coherent and plausible argument to me. I am more familiar with academic publishing but am still amazed at how many people think that getting a book published is about the quality of the idea and execution rather than the ability to make money selling it. Hurray for people like the specialty publishers you mention who seem to be able to make money selling quality books.

So that is why EVERY knitting book (well NEARLY every knitting book) also wastes space on basic knitting skills. I look at pattern books for DESIGNS, I look at TECHNIQUE books to learn how to knit. Granted, a SHORT section in the back that covers anything beyond the basics is good since some techniques go by more than one name, but really, I know how to make a knit stitch already.

I work in trade publishing, which is the type of publishing that I think you are talking about. We publish the kinds of books that you will likely find at your local bookstore or large chain bookstore. And part of what you describe is true. However, it's a bit more complicated than that.

Firstly, the "enemy" isn't so much the publisher as those big chain bookstores. Because they are the ones that are looking at sales of previous knitting books and deciding which new ones they will carry. So if a book can favourably compare to SnB or Yarn Harlot, it will be pitched to the book buyer at huge chain as such. Book buyer will decide if it is an accurate comparison, and then decide. If a book compares more to something that has not sold well, the buyer may not bring it in. Of course, all of these factors are compounded by how much marketing and promotion the publisher is willing to put in. But that marketing and promotion is largely determined by how many copies the big chains buy. And so the circle goes on and on. If Patti Purl had the best knitting book in the world, but it only sold 100 copies at large bookstore chain, they are unlikely to buy another book that is either by Patti Purl or similar in style/content/appearance to Patti Purl. Unless, of course, Patti Purl happens to be a close personal friend of Oprah with book #2.

A second problem with publishing is that the large, non-specialist publishers react to the trends rather than key in on them in the beginning. This is why Interweave and other specialist publishers have the edge; they don't react to the trends, they set them. Because the publishing process is about one year from contract to publication date, this causes a lot of "jumping on the bandwagon" when the trend is identified, and then a glut of books on that trend a year later. My current prediction is that 2008 will bring us many books from large publishers on sock knitting.

All that being said, there are some very nice books out from large trade publishers. But yes, there's also a lot of dreck.

Thanks for the hearty laugh at the cover of your grandma's crochet booklet.

I can't wait to see your book in print! Are you going to give hints about the topic??? Please??? Pretty please??? :)

I have to say that the thing I like most about this post is your grandma's crochet book -- I had to click on the picture to read her notes!

I did cheer Lisa's decision to stop stocking books that insulted grandmas.

OMG I laughed out loud when I read the "maligning my poor Grandma" comment. Then I read it out loud to my husband, so he could enjoy it, too. He said someone should write a knitting book called "My Grandma's Knitting." It would sell off of the shelves!

omygawd, are grandmas coming into their due, or is this just a light in a blog? this knitting grandmother has just posted about feminism/grandmotherhood/knitting in one breath.

every visit here am overwhelmed by synchronicity and want a longer conversation. guess i'll have to wait for the book! thanks, naomi

Annabelle, that was a great post, and cleared up some things whirling in my brain.
Of course, when I buy knitting related books/magazines, I usually do it a LYS since I figure that helps them stay in business so I have somewhere to go when I feel depressed. But I know a lot of people who do go to the "big box" place. Any time I've looked there, what they had wasn't worth the $$$.
Carole, when I click on the crochet world pic, the corner of the magazine is folded over the last word. I really want to know what those are, they kind of look like pigs to me, but I have a feeling I'm wrong.
Barb B.

Barb, it says "Crochet these Cute Country Cousins." Although I can't believe it's not spelled "Kute Kountry Kuzzins." And in case you were wondering, the article itself states:

"These two dolls are especially nice for collectors. .. Whatever use you decide for these two dolls, ya'll have fun, hea?"

That's the kind of stuff even I can't make up.

But I agree, Barb, they do look very porcine.

Thanks for this cogent bit of ranting. I teach in a LYS and have ranted on this topic much less cogently and more profanely. One of the staff printed this piece out and brought it into me last night. I look at so many of these books and think of them piled on the remainder table in about a year. And then envision 20 years from now the next generation of knitters going cross-eyed at the bizarre hidiosity of it all.