This will surprise those of you who live in places that have actually seen some serious winter weather, but my kids are absolutely dying for a good snow. We here in the Philadelphia area didn't see a single flake until last week, when some light snow showers thrilled everyone. Here is Miss Thing trying to catch some snowflakes on her tongue: 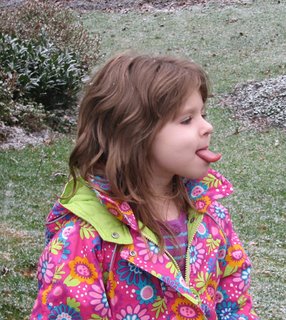 (She has a pointy little reptile tongue, no?)

Earlier this week, we had another unexpected snow shower and it made the whole world look so pretty. It was the perfect amount, barely a covering but enough to give everything a little buttercream frosting. We may get an inch or two tonight; as G. told me, they are predicting "shattered snow showers."

Things were pretty quiet here at home -- the kid back in their school routine, me noticing a sharp increase in my energy level. Which is odd, considering what time of year it is. This is partly because I think I'm getting closer to the end rather than the beginning of my Lyme, and partly because I joined a new gym and have been exercising pretty regularly.

Then on Tuesday, I got a call from my mom, who had experienced chest pains and was sent directly to the hospital, do not pass Go, do not collect $200. In today's world of crapful health plans, the notion that her doctor would see her and immediately check her in to the hospital struck me as ominous. After doing a battery of tests, it was decided she did not have a heart attack and was sent home. I am planning on driving upstate, God have mercy on me, to visit her this weekend.

As far as actual knitted objects, I've been primarily working on stuff for the book. Which, sadly, I can't show you yet. There's been a lot of thinking and planning and graphing out, and some ripping back, too. But our first deadline is rapidly approaching and so panic is setting in. I've been trying to keep some small, mindless projects on the side for times when I need a break or am knitting away from home. I'm nearly finished with a sweater that I originally intended to give to N., but upon seeing how much he dislikes wearing sweaters, even bee-yoo-tiful handmade ones, I may revisit what to do with it. What I'm really yearning to work on is socks. I've got some great sock yarns queued up in my stash and I'm going to cast something on soon, dammit.

Plus it's hard to keep my hands off my own handiwork. To wit, "Reckless," 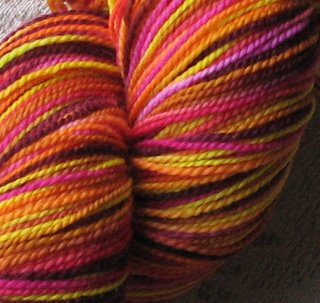 part of tomorrow's etsy update.
Posted by Carol at 7:37 PM

As the owner of a rather reptilian tongue myself, I can attest to their excellent abilities with regards to catching snowflakes.

Personally, I wouldn't mind seeing more snow here, either, but it looks like we're just going to get the deep freeze for the next couple nights. Forecast low is 2º, which means we'll probably be sub-zero.

As the owner of a rather reptilian tongue myself, I can attest to their excellent abilities with regards to catching snowflakes.

Personally, I wouldn't mind seeing more snow here, either, but it looks like we're just going to get the deep freeze for the next couple nights. Forecast low is 2º, which means we'll probably be sub-zero.

I know this is easier said than done, but try not to panic about your mom yet. It might be something, but it might be nothing. My brother spent all of Thanksgiving in Bryn Mawr Hospital with nothing after having chest pains. But with that said, whatever it is, hang in there through it all.

I am loving knitting with the BBF on the sock, BTW.

I got to pet said BBF sock yarn on wed.; ummmmmmmmmmmm.

but, dammit, I joined the "knit from your stash" KAL...

We haven't had near enough snow either. I would like enough for the kids to play in.

It may have just been the doctor covering the worst possible diagnosis for your mom. There are lots of things that can cause chest pain, but heart attacks can kill and most of the others don't so docs are supposed to rule out cardiac problems first. (the things I have learned working for medical malpractice attorneys)

Wow, Carol - LOVE the colors on that sock yarn. Beeyouteeful.

Is that a Hanna Anderssen coat I spy? I love the colors of their stuff.

And I hope your mom's okay and this was just a scare. I'm not sure what makes me feel more helpless - sick kids, or sick parents.

My kids are wishing for snow- we had enough Sunday to sled in, and they were out of school Mon & Tues from all the ice. (and what a cutie Miss G is)
I'm having my coffee while "shopping" this morning, and someone snatched that beautiful brown/honey yarn just about faster than you had it posted.
Enjoy your visit this weekend- once you've seen her I'm sure you'll feel better about it.

Cripes, the east coast people have clearly beaten me to the punch. I looked in the list, and the worsteds were so pretty!

Good luck on your trip to see your mom.

My best thoughts for your mother. I do hope everything turns out fine. I'm sure you already know this but always go with your gut and don't take dr's at face value. The human body can be unexplainable but drs make mistakes too. 4yrs of representing them in med mal cases taught me that.

Very often digestive problems masquerade as heart problems, especially in women. If you don't get satisfactory answers from the cardiologist and they establish it is not her heart, try a gastro-specialist.

My daughter is dying for snow too, we had a dusting in NYC recently and the kids around here were going up and down the block scraping together tiny snowballs off what was on people's steps!