Rhinebeck Redux (or how to chuck a punkin')

Rhinebeck is, above all other things, a sheep show. That means plenty of sheep shots: 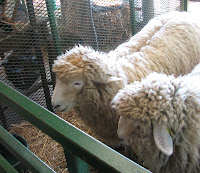 This year's featured breed was the Blue-Faced Leicester, one of the first breeds I become familiar with when I first became obsessed with knitting. I think it was Berroco that used to make a 100% Blue-Faced Leicester wool yarn, back in the day... But I must confess that I took indiscriminate sheep shots and can't remember which particular breeds I was photographing at any given time. 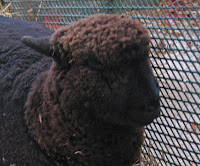 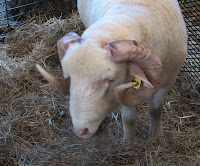 There. Dolores, eat your heart out, hon!

If you think that Rhinebeck is just about fried food or gorging on yarn, remember that this is an important place for farmers and breeders to visit. They purchase stock for breeding, sell fleece and other products they produce, and I'm sure there's a lot of networking and learning about new stuff in the agricultural industry. We tend to forget that this is a livelihood for farmers and breeders, and not just a nice weekend in the country.

In keeping with the serious nature of the event, I felt a burning desire to attend the Llama Leaping event. I was not disappointed. It was like the game of limbo, only in reverse: they set up a pole and the llamas jumped it, each round raising the pole a little higher. 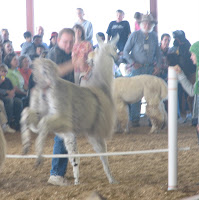 The llamas, being no dummies, quickly got irritated, so as their handlers led them up to the ever-higher pole, they started balking. Which led to all sorts of hijinks as the handlers tried to entice them to jump and the emcee cajoled them over the loudspeaker with cries of "Pretty please!"

This llama dressed up for the occasion 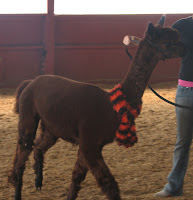 and I must say, it was the most attractive use of fun fur that I've ever seen.

After the Leapin' Llamas, I made a beeline for the piece de resistance of sheep show events: Punkin' Chuckin'.

Or is it Punkin' Chunkin'?

This cracked me up. Basically, a bunch of folks spend the year figuring out ways to build contraptions, like this catapult-ish structure, 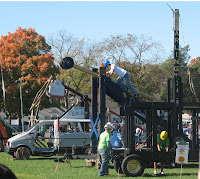 to hurl pumpkins as far in the air as they can. Our favorite was called "Lord Gourd." You can see the devastation this wrought on the poor pumpkins 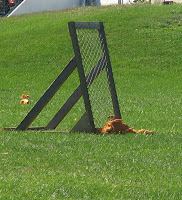 when the hurling went well. (Do you think they have a chaplain to give the pumpkins Last Rites?) I heard that they also do a human-powered version similar to the shotput, where people throw the pumpkins, but alas, I wasn't able to stay for the whole event. Plus I forgot to bring my gourd hard hat: 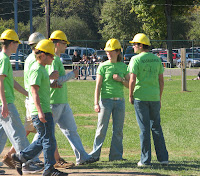 As if this senseless slaughter of innocent, peace-loving squash was not enough, there was also the sacrificial mutilation of the pumpkins.

Equally distressing was this bizarre fox, who, inexplicably, had 9-1-1 on his belt buckle.

Next post: the artistic side of the show...
Posted by Carol at 9:32 AM

I LOVE Punkin Chunkin! My cowboy and my husband want to come next year just for that!

You have a cowboy AND a husband? Wow. Are you a Mormon or something? (;

So, what I'm reading is that you got bored with the vendors this year and Veronik went home.

Carol, did you forget you didn't have your kids with you?

Settle down, Joey, or I won't publish that gorgeous photo I just found on my camera of you.

Remember, I'm from Wilkes-Barre. Obscure sports involving the manly destruction of things is second nature to me.

p.s. If I had brought my kids, my blog entry would consist of nothing but whining about how family-unfriendly the festival was to SUV-like strollers....

Looks lovely...thanks for the stroll through a nice sounding time.

I was too obsessed with the yarn this year and completely missed this wonderful activities. Only saw the sheep dog trials in effort to recreate 'Babe' moment. I have to hang with you next year!

The "catapult-ish" thing is a trebuchet. And you didn't get a photo of the very, very cute CIA student I saw carving punkins, but I only saw him Sunday afternoon (when I was actually able to get out of the booth for a bit).

Gomez Addams voice: Mel, I love it when you speak French....

Just in case you wanted to know:

The first sheep picture is of Romney ewes, the second of a natural colored Romney (I am pretty sure) and the last is of a beautiful Horned Dorset that was my booth neighbor all weekend.

Love all your shots of the fair!