Let's start with December, finishing out the 2009 Scandinavian mystery-a-thon book report. This month, I again enjoyed the generosity of friends who lent me some good books. I began with Red Bones: A Thriller

by Ann Cleeves, which is the third installment in a series of mysteries set in the Shetland Islands. (Why, yes, I did pick up the first one because I wanted to learn more about the place that gave us such great knitting. We already know I'm a huge knitting dork, right?) Jimmy Perez is the lead detective and he is called to investigate a possibly-suspicious death: an old woman is found dead in her yard, having been shot at night. It looks like her neighbor/grandson accidentally shot Mina Wilson when out hunting that night, but Perez isn't quite sure that it was an accident. When a visiting grad student working on an archeological dig is found dead near Wilson's house, Perez has to figure out whether the deaths are related and who is/are responsible. A good solid mystery (I didn't figure out who did it), an interesting part of the world, snappy writing.

by Arnaldur Indridason, was another one that Anmiryam lent me (thanks!!) so fear not, the brooding Scandinavian detectives are back this month. Inspector Erlandur is called out to investigate the stabbing of a boy, the dark-skinned son of a Thai immigrant. The death of the boy raises all sorts of questions about immigration, xenophobia, and racial prejudice -- along with the usual heartbreak and suspicion that descend upon the families and friends of murder victims. Another good police procedural.

by Charles Todd. I like the Ian Rutledge series, but I have to say that by now, the conceit which once seemed original and even daring is now starting to seem annoying. Rutledge is a veteran of the brutal trench warfare of WWI, and his post-traumatic stress disorder (WWI was when the phrase "shell shock" came into wide usage) takes the form of a voice in his head -- the Scot-accented voice of a dead soldier who served with Rutledge and whose death causes Rutledge on-going guilt and grief. Rutledge goes through his everyday life as a Scotland Yard inspector with the voice of this young Scot ringing in his ears, talking to him as clearly as someone in the room (although no one but Rutledge can hear him.) Rutledge thus tries to cope with his PTSD and hide the existence of the voice in his head from those around him, while solving tricky murder mysteries. After about ten books, though, I'm starting to find the voice in Rutledge's head more irritating and distracting than anything else, even though Todd is an excellent writer.

I give Todd credit for fashioning an original mystery: an English gentleman goes missing in the beginning of the book, is found alive, and then Rutledge is called to investigate the murder of a completely different woman in a different county who shares the same last name as the missing-but-found man. Are the events connected or not? The book ends with Rutledge confessing his romantic feelings for a recurring character in the series. It is my fervent hope for 2010 that Rutledge gets laid finds a real relationship and finally manages to ditch the voice in his head once and for all. I think the character and the author can manage quite nicely without this stylistic crutch.

by Dave Cullen. My pal John read this and spoke very highly of it, so even though I wondered if the subject matter would prove too disturbing, I gave it a try. It was fascinating and compelling reading. Cullen does a good job straddling the line between communicating the horror and terror of what happened inside Columbine High without indulging in melodrama or wallowing in the gruesome -- no mean feat. He also displays a great empathy and kindness toward the victims, their families, and to a lesser extent, to the families of the killers. Perhaps the most fascinating aspect of the book is the extent to which Cullen methodically busts numerous myths that were perpetuated in the hours and days immediately following the shootings. Think that Columbine was caused by two members of the "Trenchcoat Mafia" who sought revenge against a clique of jocks who bullied them? Read this book and see if it changes your mind -- and see if it isn't a cautionary tale about the way that the media fastens on "memes" that aren't necessarily borne out by the evidence.

The Sweetness at the Bottom of the Pie

by Alan Bradley. This was the perfect book to round out the reading year. Bradley's book won the Dagger award for best first mystery novel. The main character is Flavia DeLuce, an eleven-year-old girl living in her family's dilapidated manor house in the British country in the early 1950s. Flavia is obsessed with chemistry, has two older sisters who annoy her, and longs for the attention of her eccentric but distant father. When a murdered man is found in the backyard, and her father is the prime suspect, Flavia decides to exonerate her dad by finding the real murderer.

Sweetness.... was a charming read: droll humor, amusing characters, an offbeat mystery, and the dreamy setting of rural post-WWII Britain. Flavia is a delightful character and although the book is written entirely in her voice, it never becomes too precocious or cloying. It's impossible not to think about Harriet the Spy when reading about Flavia: the highly intelligent observer who's an outsider simply because she's a child and no one pays her much attention. But there's also a little bit of Nancy Drew in Flavia. Bradley's got a sequel coming out this spring, so I'll be looking for it.

When I look back over the reading I did this year, I'm pleased that I accomplished one goal: I read a half-dozen books that I'd been meaning to read and that were more than pure entertainment or escapism (The Naked & the Dead, Goodbye Columbus, On Beauty, Middlesex, the 2 Nancy Mitford books, andI started but didn't like The Guernsey Literary blah-de-blah). I'm going to keep that goal for 2010.

Now that my deadline knitting is complete, I was able to turn to two unfinished projects and finally complete them. I finished a gift for one of the twins' teachers, whose little boy just turned one a few days ago: 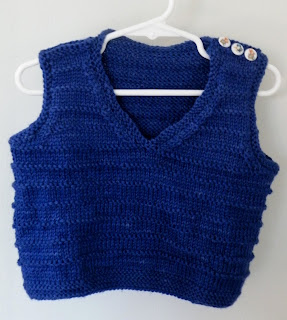 This was a pleasure to knit: quick, easy, a good pattern, and the yarn was lovely, too. The shoulder features some Beatrix Potter buttons because I couldn't resist (two Peter Rabbits and a Jemima Puddleduck).

On the fabric front, I finished my first real quilt: 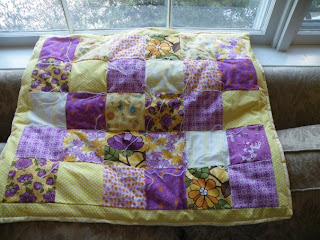 It's a baby quilt for a dear friend in Chicago whose daughter was born this fall. I was told the nursery was being done in yellow and purple, so I had a blast finding fabric. The reverse is done in the Jay McCarroll psychedelic wildlife print that came out last year. I need to work on better edging, but overall, I was really pleased that my first effort came out so well, and I hope Mama and Baby like it, too.
Posted by Carol at 7:40 AM

Thanks for the book reviews. I've added Red Bones to my ebook wish list for my Nook. Unfortunately, the first two Ann Cleeves books aren't available as ebooks (yet, I hope).

Glad you liked the books! Sweetness is on my list as well, so I need to get that one underway.

We listened to the Guernsey Literary and...Society, I think it's much better as an audio book than a reading book. It made the drive home from Maine a lot more bearable. On second thought, that may not be such a great recommendation as just about anything could make that drive better.

The quilt is gorgeous- love the fabrics.

I have another author you might enjoy, Carol. We've recently discovered Alan Furst, an American who writes spy thrillers set in Europe between 1935 and 1942. Each is different, set in a different city with different characters of different nationalities at a different time, so you can read them in any order. The main characters are usually ordinary people, often political expats, who get drawn into espionage work. There's no torture or nasty death described, but you know it's always a possibility so it keeps the tension up. He writes so well about the times: the way people lived, their clothes, food, etc, and the politics are interesting also.