In which Swatchy gets some Canadian action

Crosspost with Travels With Swatchy:

This morning, after the kids were off to school, I went looking for Swatchy. I found him here, still sleeping at 9:30. 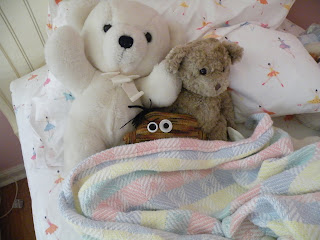 Poor l'il Swatchy. He was tuckered out, after a weekend beyond his wildest imaginings...

It all started so innocently. He climbed into the car and settled himself on the dashboard, perhaps thinking that this was going to be a wholesome weekend, seeing as he was traveling with a suburban, station-wagon-driving soccer mom. 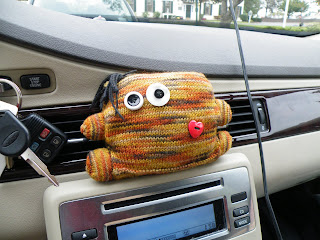 The drive up was quick (relatively speaking) and uneventful. Swatchy enjoyed seeing the autumn foliage, and was fascinated by the gossip, although he tried not too look too interested.

He was happy to arrive at the hotel, quickly selecting a lovely color-coordinated skein of Black Bunny Fibers Canadian Luxury sock yarn to nestle down in for the night. 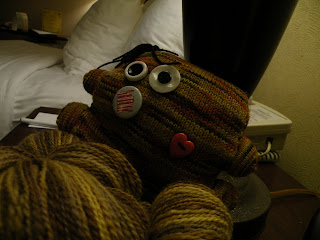 I think Swatchy figured, once everyone was in bed by 10:30 p.m., that his traveling companions were nice, if a bit sedate.

He was a good sport as we awoke early the next morning, bundling up and arriving at the show not long after the gates opened at 9 a.m. 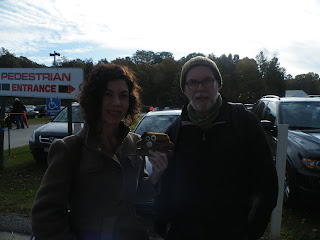 He was quite excited to be hanging with knitting designer Laura Grutzeck; I heard Swatchy whisper excitedly to passersby, "See that lady with the pretty curly hair? She has a sweater in Vogue Knitting!" He found faithful traveling companion Jim to be delightful and eminently civilized, too.

Swatchy enjoyed seeing all sorts of beautiful fiber and yarn, and although he found the llamas and sheep a little intimidating, given how big they seemed to him, he quite enjoyed snuggling up to the bunnies, like this one: 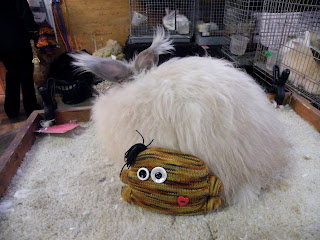 (The bunny, on the other hand, disapproved.)

I was having a great time seeing old friends and making new ones, buying some roving, fondling the wools, but then I saw Swatchy surreptitiously yawn. I decided it was time for the big guns. So Swatchy got to meet Jess, of Ravelry fame: 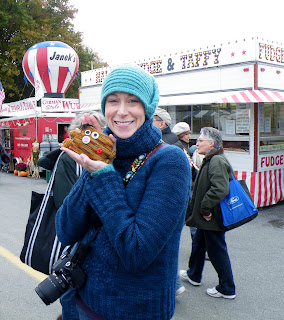 and Clara Parkes, of Knitter's Review and book fame: 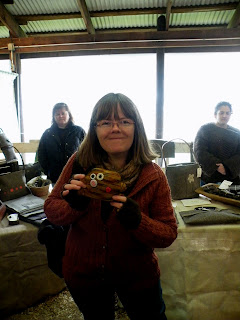 and Dr. Mel, of kilt-wearing fame: 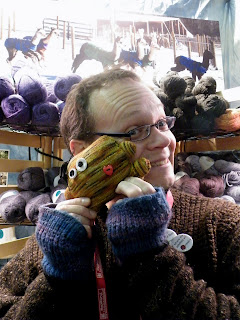 I must say that Swatchy was very well-behaved and extremely polite to all the knitterati that he met, except when he mistakenly thought he heard Kristen Rengren 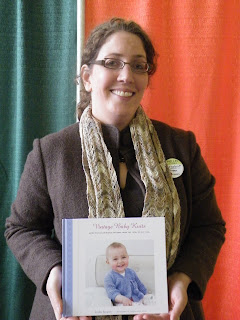 say that she knew a woman with Chronic Fatigue and it was all in her head, and then he threw himself at the table where she was book-signing, screaming stuff about "people who need to go to the CFIDS website before they start shooting their mouths off about stuff they know nothing about" until I was able to pull him off and tell him that she actually said "I know a woman with Chronic Fatigue and she has to stay in bed" and then he got all embarrassed and I had to leave the author's tent before Melanie Falick kicked the shite out of me.

At that point, I whisked Swatchy away, and we retired to our hotel room for a brief cooling-off period before dinner. Swatchy wasn't very impressed with our favorite Rhinebeck diner: 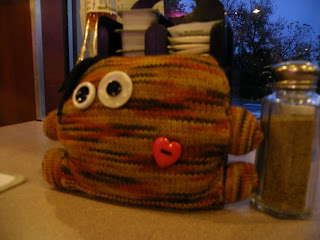 But he cheered up immensely when he met our dinner companions, including Mindy 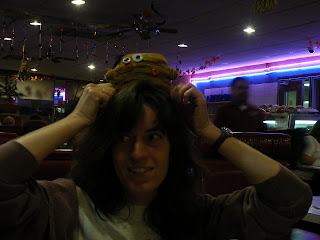 (he was all over poor Mindy!); the wild and wooly Ali P (I need your blog link, Ali): 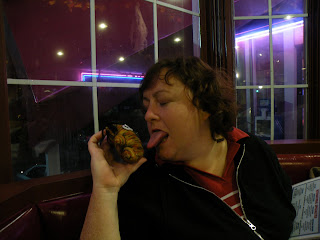 and last but not least, Vé-vé. 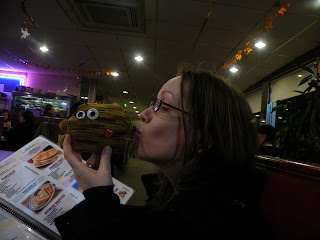 I think that those wild Canadian minxes were a terrible influence on Swatchy, because last night I went up to Little Miss's room to kiss her goodnight and I found this: 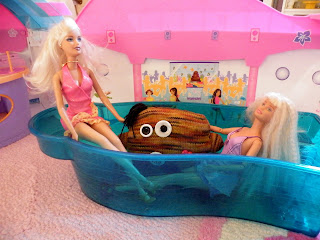 Oh, Swatchy, lolling in the hot tub with the Barbie twins? What have I done?!
Posted by Carol at 9:51 AM

You had too much fun without me.
Then you gloat about it.
But Laura's hair IS very pretty.
I'll give you that.

Good thing you didn't introduce him to Delores.

Sorry to miss you and swatchy, but it was great to inhale all the yarn fumes.

Aw, you know I missed you. And your comment looks almost like a haiku! Come next year fer sure. Selma isn't allowed to go anywhere else that weekend in 2010.

He's just trying to stay warm that's all. Just like us Canadians do. That's all there is to it. Nothing minxish at all. Honest.
Maybe I'll make it next year. Been saying that for a few years now. Sigh.

I, like Ms. Merrick, am a touch bitter that I was in PA while fiber-y fun was had in NY, so I will be small and petty and point out that your disapproving rabbits link is wrong and leave it at that.

Figures that Swatchy's moral compass would get broken after a weekend with you ... at least Laura and Jim probably survived, being veterans and all ...

You had me laughing my butt off over here! I'm so happy you had a great time and I'm sooo happy a I found your blog!

It's a good thing that Swatchy is superwash or that hot tub could be very very dangerous.

Thank you, Carol, for letting Swatchy tag along with you! You are my hero today!

Knittah, you are my hero every day for the past nine years.

I will refrain, however, from singing "Wind Beneath My Wings." (:

I give that three snorts and a giggle!

Wow, Swatchy's life is far more exciting than mine.

Swatchy may never be the same again... (I know I won't)