This week will be a week for catching up, while trying very hard not to get further behind. N. did indeed have pneumonia (we had the pleasure of a chest X-ray early last week), in both lungs, and Tuesday night we came ominously close to a hospital admission. The docs gave him another night on the second oral antibiotic and thankfully he turned the corner that night. Now, less than a week later, his cough is nearly all gone and he's fine. The amazing resilience of kids.

fantasy -- and I always enjoy making costumes for my kids. My piece de resistance thus far was 2005's Fish Costume 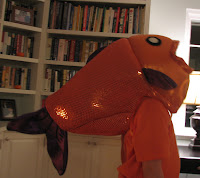 but I have high hopes for Elvis's choice this year: The Parrot. His sister G. wanted to be a ballerina (cool, I thought, I can buy a tutu!) except she insisted on being a BLUE ballerina. Do you know how hard it is to find a blue tutu? N. decided to be a wizard. Even though he doesn't really know anything about Harry Potter. Go figure. As long as there aren't pupiks hanging out or a real excess of bad taste (Tom wistfully mentioned a Lisa Nowak costume, complete with a jar of Tang, a roll of duct tape and a pair of Depends), I'm flexible. 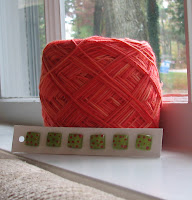 is a skein of Black Bunny DK-weight merino, along with a card of glass buttons I got at Stitches East. It's for a baby shower gift, for someone who loves orange. I'm going to be dyeing up some more BBF DK-weight in the coming weeks, which is machine washable and perfect for little baby sweaters, so look for it. 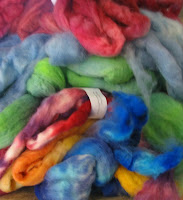 Inspired by Rhinebeck, I blew the dust off my wheel and produced this: 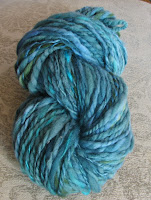 (from a Blue-Faced Leicester roving from Black Bunny). I'm definitely getting more consistent; I just need to work on spinning a bit thinner. Everything I produce seems to be aran-weight or heavier.

Last, I would be remiss if I did not mention that today is my mom's birthday. I can't believe she's seventy-seven. She's in great shape and excellent health, but it still scares the bejeesus out of me that her age sounds so, well, old. She doesn't read my blog (she doesn't know what a blog is) -- which probably explains why her heart is still in such good shape -- but Happy Birthday, Mom. You're the best.*

That fish is pretty darn cool!

I've thought of reproducing just to be able to make costumes and take the kids out to scavenge candy. I love Halloween that much!

In the past I have made a shark (out of corduroy no less), a dragon, a unicorn, a black starry/gold lame harlequin and too many others to admit to.

Can't tell you how much I don't really miss those days.

Andrew, (the shark and dragon) now a grownup, had his greatest Halloween success when he went to a mixer at LaSalle High School.
One year he went as Scooby Doo.
He came home, "Mom, the girls were lined up around me. Next year I'm Winnie the Pooh. It's the only way I could do better."

I'd work on spinning more consistently (in terms of thickness and amount of twist), rather than spinning thinner.

It doesn't matter how thick or thin you spin, you have to be able to control the diameter of the single through drafting, and be inserting a consistent amount of twist along its length. They're the essential skills you need to get down, and the ones you'll need for spinning anything--no matter the fibre type, the thickness of the single, the ply structure, etc.

Spinning a fine yarn that's consistent in diameter and twist is easier for most people than spinning a thicker yarn that's equally as consistent. Most spinners drift to spinning thinner yarns and then have to learn to spin thicker.

I'm very glad to hear the little guy is feeling better. Do they need more canadian candy sent up?

Please wish your mom a happy birthday on our behalf!

Good to hear the little man is doing better.

Love the fish costume. Hope the ballerina is happy - blue is tough even in real dance costumes. I'll have to send the lavendar tutu your way when Ms. E is too big.

have fun on wednesday night!

keep those pupiks warm (I actually know what those are!) tee hee...

I think your spinning looks great. Ted's right- aim for consistency- controlling your size will follow. And do try to do a little every day- one day you'll have that "ah ha" moment when you realize its coming naturally. And remember, if you want perfectly even yarn, buy commercial- your homespun will be the most charming yarn you use.

Give me strength- a roving update...

Owen says Thank You- he's having a wonderful day. Hope your Mom is!

I'm so glad N is feeling better and will be rested and ready for the Big Day. I remember that fish costume. F'ing inspired! I miss those days of making costumes. However, since Jenn has been in the SCA and making her own medieval costumes since she was 15, I guess it did rub off on her.

Elly doesn't read my blog either, although she's dimly aware of it because when we go to the yarn shops, sometimes people recognize me. She is, of course, nonplussed about it.

Listen to Ted. He said it all. Concentrate on your drafting consistency and don't worry about how thin you spin. It takes time and you'll get there. And damn, we never did do our spinning class at Rhinebeck. Methinks I will have to come down to Philly, huh? Any time, babe. You name the date, I'll be there. And help ya.

Oh, I'm glad to hear that The Wizard Boy is better! I hope you will post pictures of The Parrot, The Blue Ballerina, and The Wizard, as I would love to see those costumes.

(I will admit to being especially impressed by the parrot idea - I really don't think that would occur to most kids.)

There is nothing better than interesting children, is there?

Happy Birthday to mom! Your spinning looks great, and your costumes - oh my gosh! You're very inspiring! I did manage to sew up a poodle skirt and mermaid costume this year. Think we're anywhere near each other? A fish and a mermaid would be really cool trick or treating together...