Hard to believe, but another year has flown by and Charcoal turned two on Saturday. (He's a Libra, in case you were wondering.*) What does the spoiled bun-bun get for his birthday? 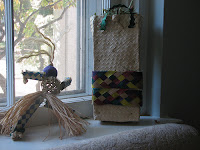 A hula girl (left) and beach basket (right), made in bunny-friendly, edible, chewable materials, from the fine folks at Bunny Bytes (where the urban rabbit shops). Charcoal was a gentleman, though: he bought the hula girl dinner before ripping her skirt off.

Of course, there was cake (or at least cupcakes): 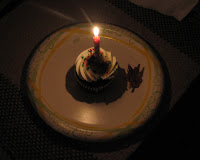 In knitting news, I finished the Kaffe socks for N., 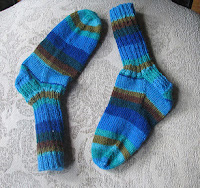 and started the next pair, for G. It's "Chewy Spaghetti" sock yarn in the colorway Sporty. G. chose it because pink is her first favorite color and blue is her second favorite color.

With Stitches and Rhinebeck coming up, I'll need lots of mindless sockknitting to carry along.

I've been busily dyeing, and I'll have a Black Bunny Fibers update on Wednesday, around noon-ish. In addition to sock and laceweight yarns, I've got three batches of pure silk DK (which I did once before) and a couple of skeins of worsted-weight Columbia yarn from a Michigan farm (it's nice and soft).

*According to a pet astrology website found on the prestigious Internet, "Libra pets are easy-going and like lots of attention. These pets divide their attention equally among all members of the family. They make wonderful companions and hate to be left alone. These pets love good food and soft music. They can be stubborn at times, and may disappear to sulk."

**I got together for a quick cup of tea and some knitting with Liz last week. You should see her phat ride...
Posted by Carol at 2:15 PM

Yay, more worsted! I have a big project going with the various ones I've collected so far. :)

happy birthday charcoal; you are one lucky bunny!

will we see your pretty face on wednesday? (crossing fingers)

Lovely finished socks. Those pink and blue ones are gonna be pretty rockin', too.

Yippee, an update. Now, its off to see what they say about Aries pets...

Hey, aren't your goats all Capricorns??

Glad you liked the wheels. It was time to end my minivan years. Best, it was good to catch up and knit.

Ok, you got me there. Actually, they're all March/April babies. I was thinking of Puff. And heaven help me, the Weebit is a Taurus...

Happy Belated Birthday to Charcoal! I'm glad he got presents that he will really be able to enjoy.

where are the bunny pictures?